What is the Rolex Submariner 5512 worth? An iconic model within Rolex’s archives, the reference 5512 represents the point in the history of the Rolex Submariner where the brand’s iconic dive watch first started to take on what would ultimately become its contemporary form. During its 20-year production run, the Submariner 5512 underwent several enhancements such as modifications to the crown guards, improved movements, and dial updates.

Today, there’s a robust market for the Submariner 5512 among vintage Rolex watch collectors and as a result, their values are continuously on the rise. However, there are many factors that determine the current value of the Rolex Submariner 5512. 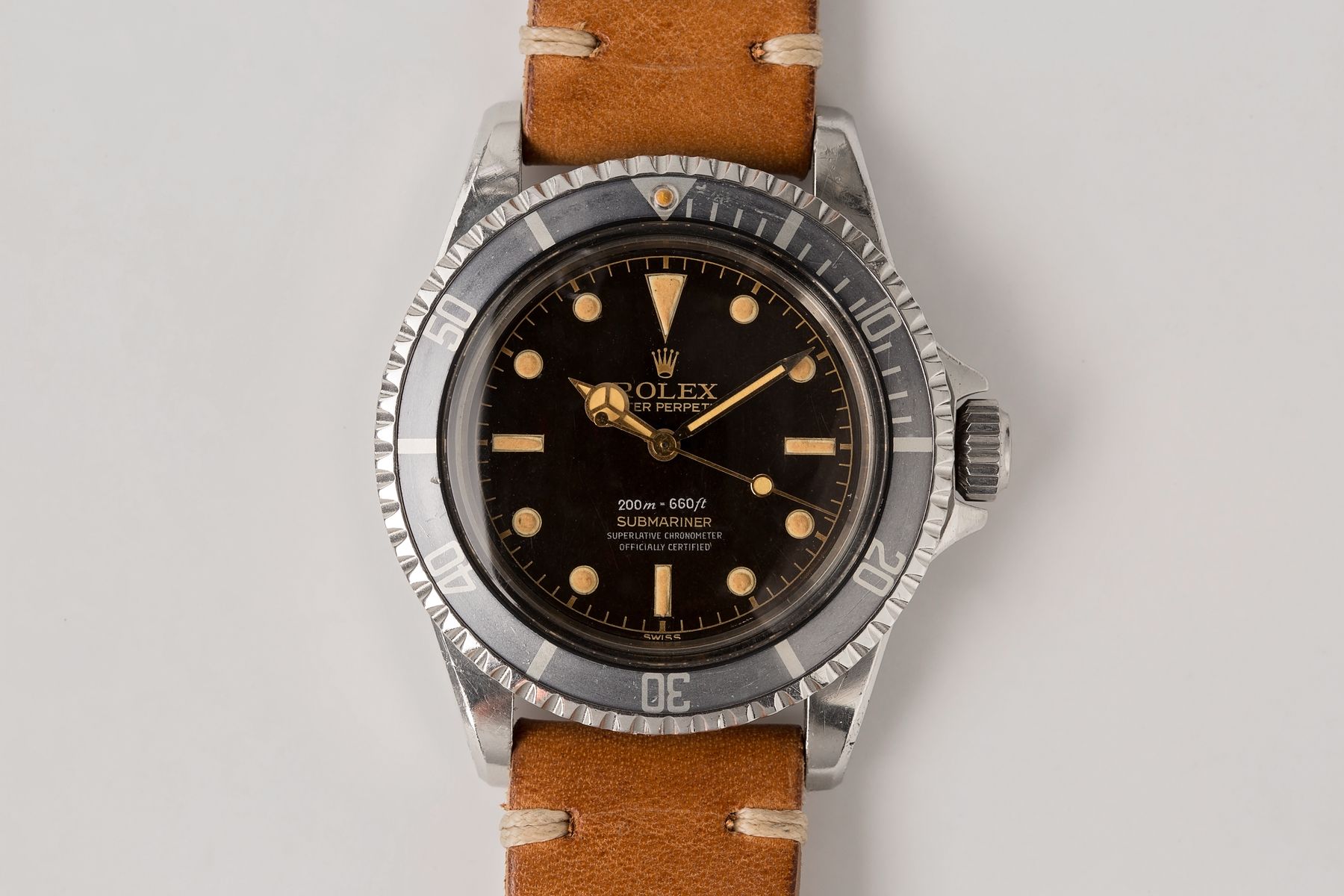 Click here for our Ultimate Buying Guide on the Rolex Submariner. 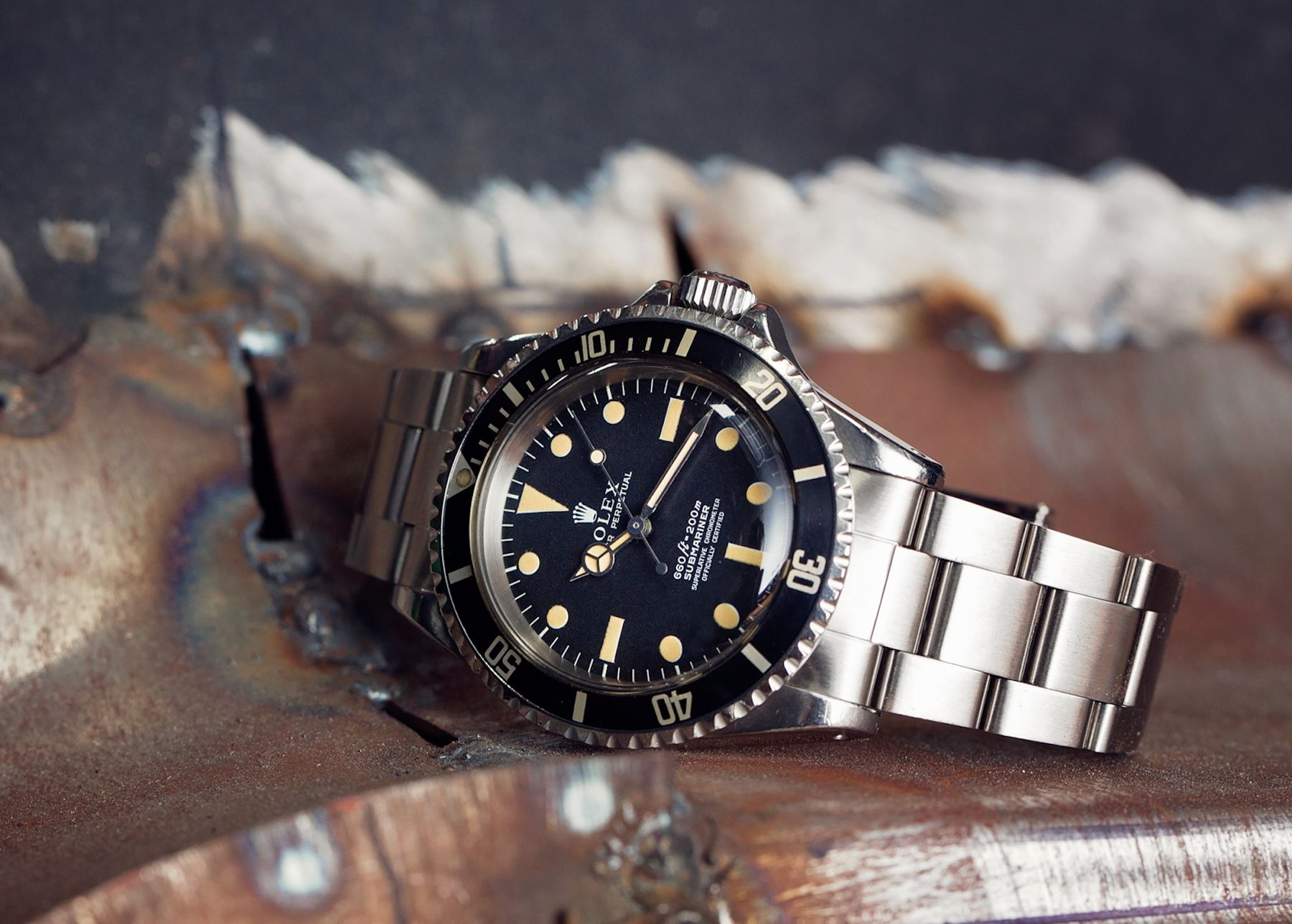 The Evolution Of The Rolex Submariner 5512

To better understand the value of the Rolex Submariner 5512, we have to look at how the model differed over the course of its history. Take for example the crown guards. When the model first came out it had square crown guards, followed by pointed crown guards, and then eventually the rounded style of crown guards that we all know today.

The dials of the reference 5512 also evolved over the course of its manufacturing run. Early versions of the Submariner 5512 were equipped with non-chronometer certified movements and they therefore did not include the ubiquitous “Superlative Chronometer Officially Certified” text on the dial. These versions are referred to as Two-Line Submariner 5512 watches since their glossy black gilt dials only have two lines of text below the hands.

Once the Rolex Submariner 5512 was outfitted with chronometer-rated Caliber 1560 (and later the Caliber 1570) movements, the dial then became a Four-Line Submariner 5512 because it included the Superlative Chronometer Officially Certified (SCOC) designation. The four-line editions were first available with gilt dials with golden text, followed by matte black dials that featured all-white printing on them. 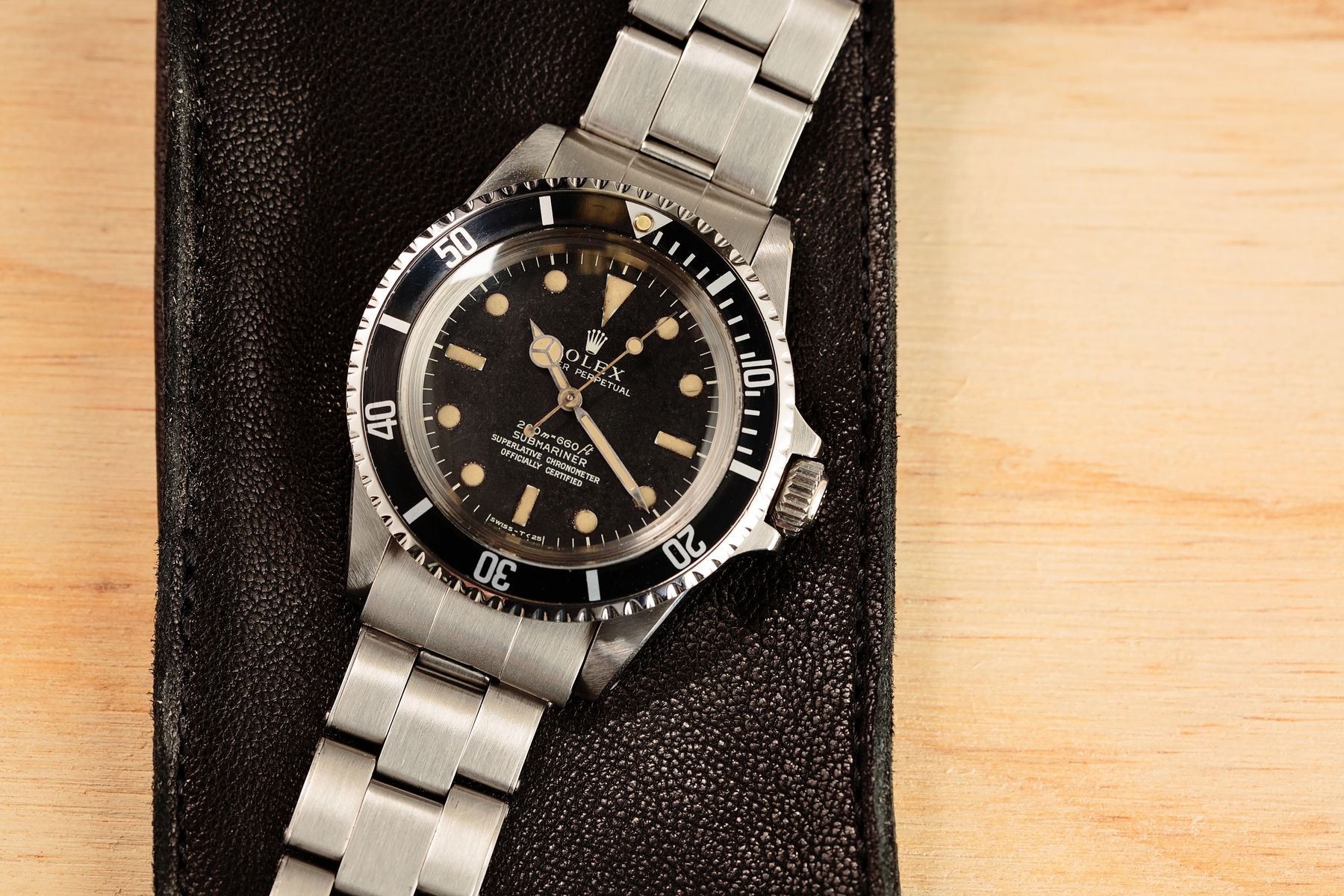 The next most valuable versions of the Rolex Submariner 5512 are the ones with pointed crown guards. In 2016, Phillips sold a 1961 reference 5512 with two lines for $54,307 and in 2017, Christie’s sold a 1962 Submariner ref. 5512 with four lines of text for $47,929. Similarly, vintage Rolex prices have significantly increased over the course of the last several years, and if these same watches were to come up for auction again, it is highly likely that they would sell for significantly higher values.

Good news for fans of the Submariner 5512 is that later models from the 1970s are substantially less expensive than older versions. The price point for Submariner 5512 watches from the 1970s with rounded crown guards, caliber 1570 movements, and matte black dials with all-white printing start out at just over the $16,000 mark and increase from there depending on overall condition and whether they still have their boxes and papers.

As interest in the vintage Submariner 5512 increases and more people realize that it is significantly less common compared to its ref. 5513 (non-chronometer) sibling, it’s safe to say that the value of the Rolex Submariner 5512 will also continue to rise – at least for the foreseeable future. However, like all vintage Rolex watches, it’s not just the year and design details that make a difference to the overall value, but condition and provenance will always always play a factor. 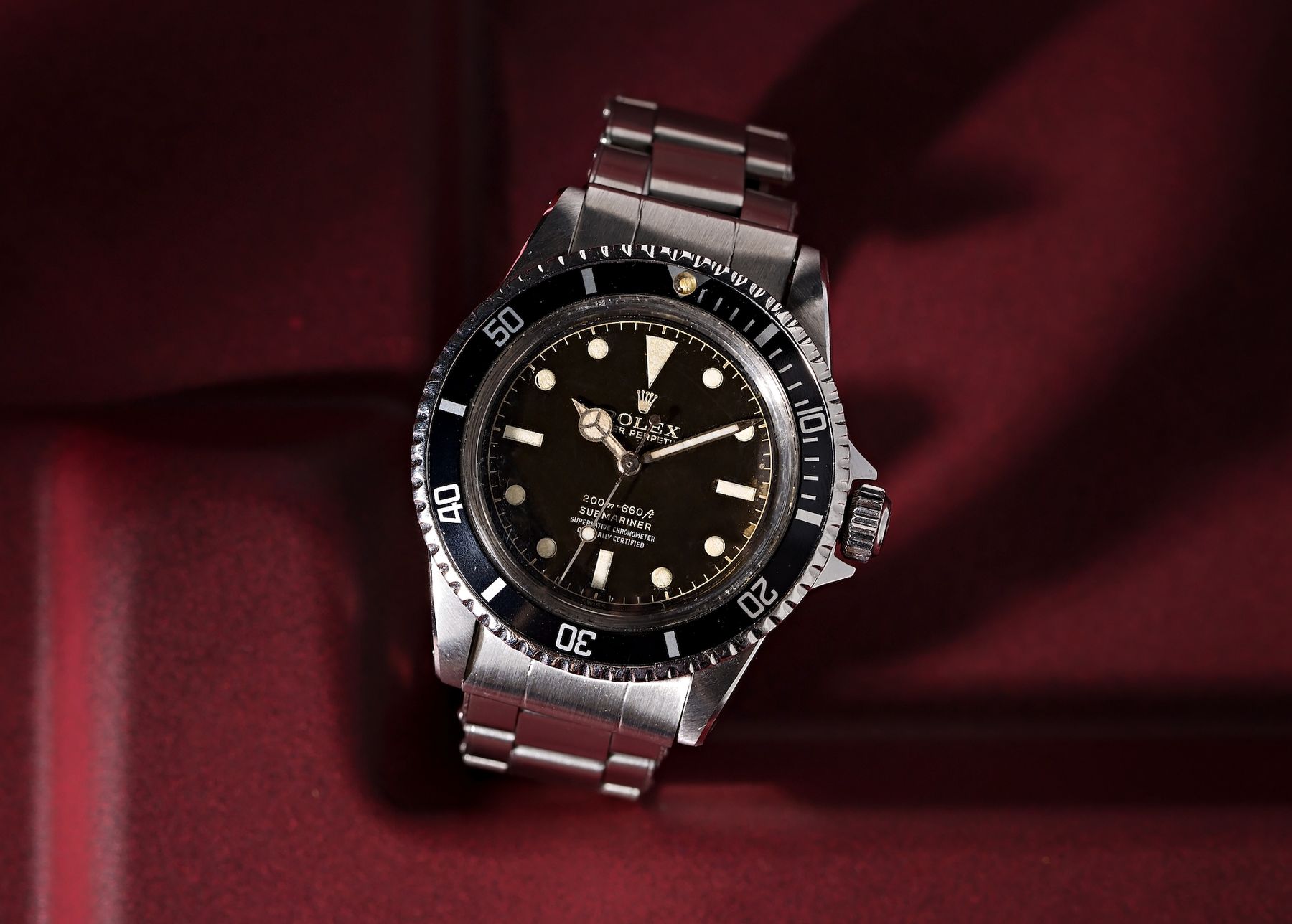 The Most Expensive Rolex Submariner 5512 Watches

Although the vintage Explorer II ref. 1655 goes by the “Steve McQueen” nickname that is not actually the Rolex watch the actor wore in his real life. Instead, The King of Cool chose to wear a Rolex Submariner reference 5512 as his daily watch. In 2009, the auction house Antiquorum sold Steve McQueen’s Submariner 5512 for a record-breaking $234,000 – which was (at the time) the highest price ever paid for a Rolex reference 5512.

It goes without saying that the provenance of the watch was a huge factor in the final sale price of this particular Submariner 5512, but due to rising vintage Rolex prices, Steve McQueen’s Rolex Submariner is no longer the most expensive reference 5512 that has ever been sold. In 2020, a reference 5512 from the early 1960s that was fitted with a rare 3-6-9 “Explorer-style” dial sold for $250,000, beating out Steve McQueen’s personal watch for the record of the most expensive Rolex Submariner 5512 that has ever been sold.

What are your thoughts on the Rolex Submariner 5512? Do you like it? Do you think it’s fairly valued in today’s market? Tell us what you think in the comment section below! 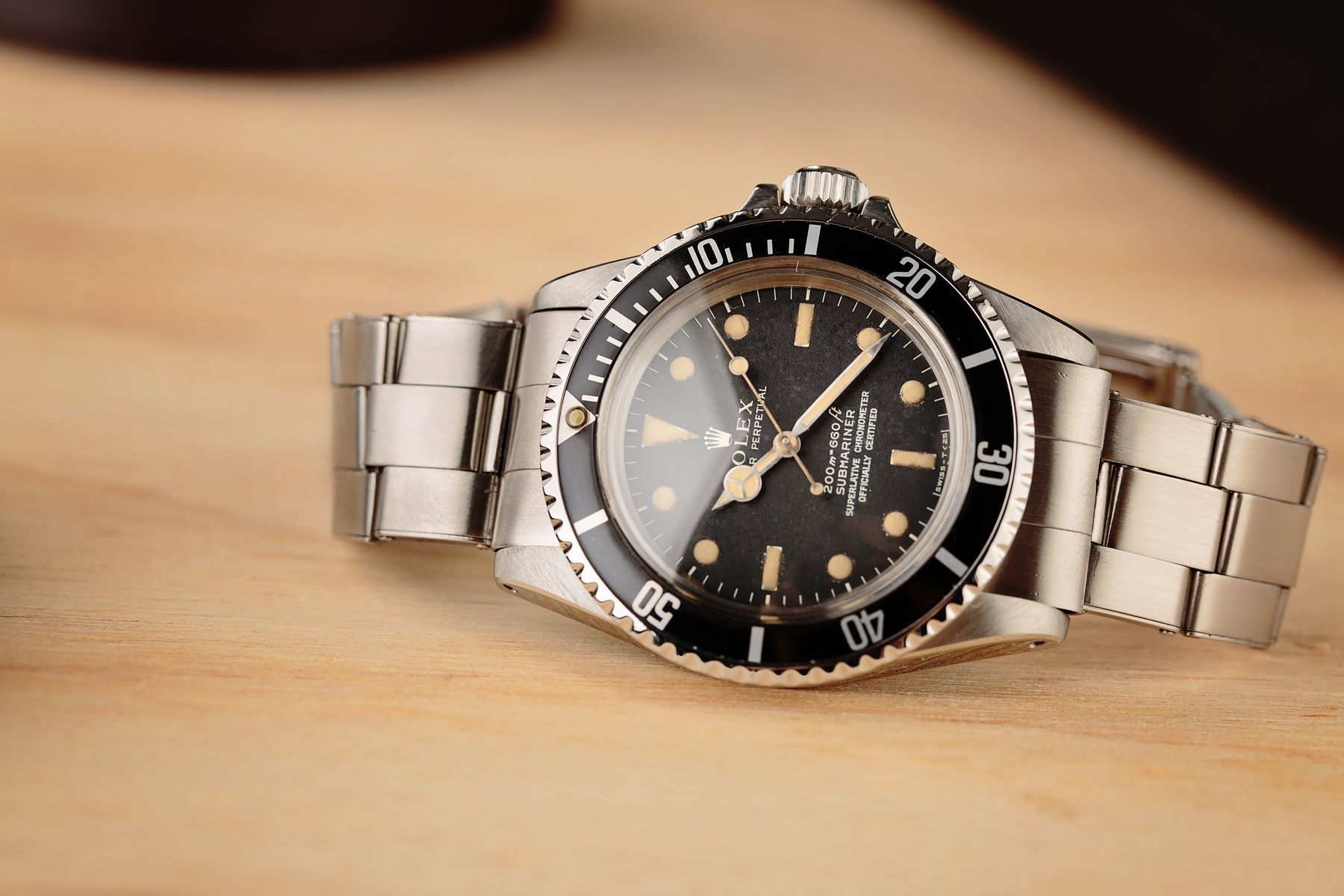 The post How Much Is the Rolex Submariner 5512 Worth? appeared first on Bob’s Watches.