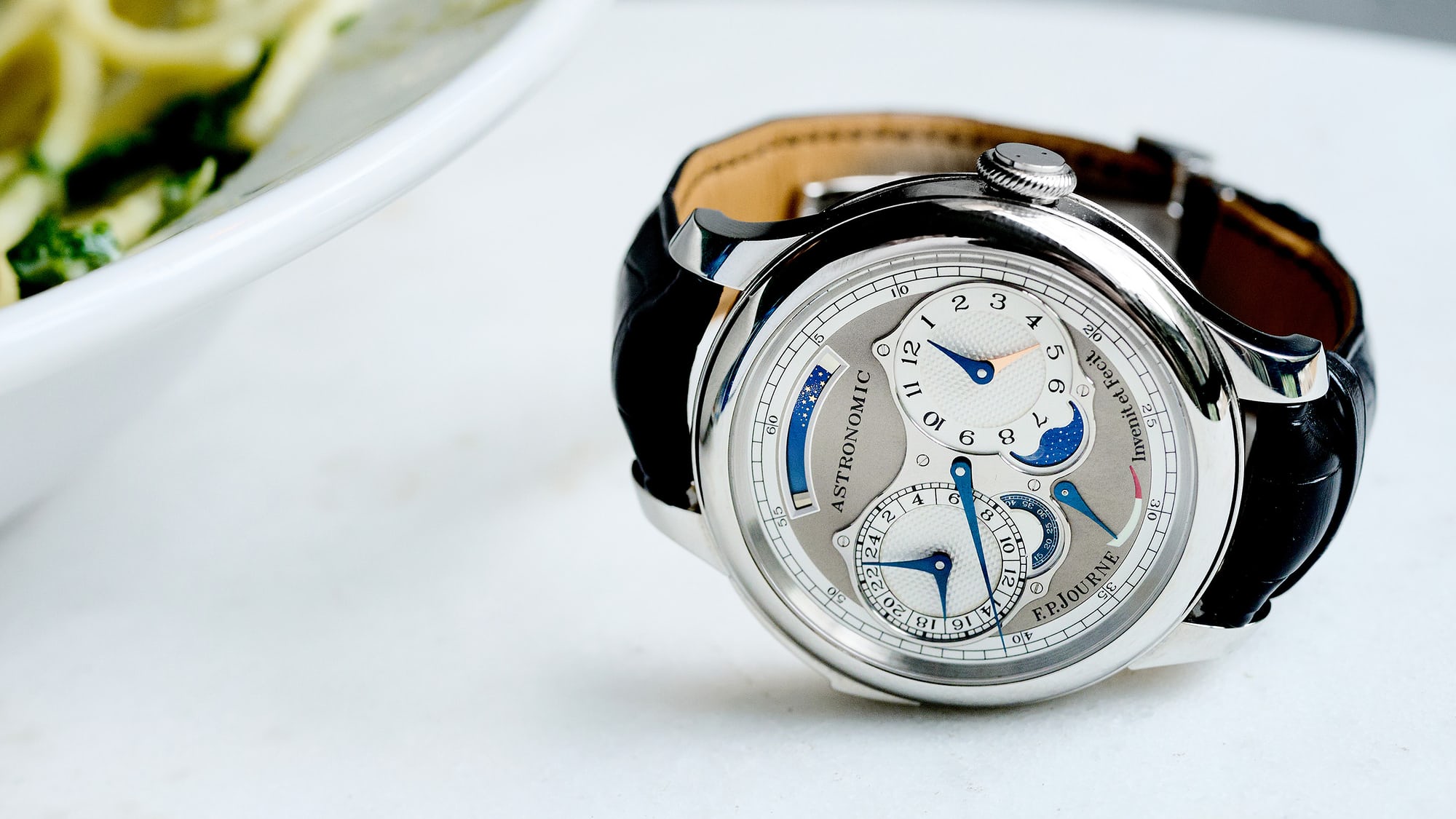 There’s an idea in art known as “the child’s eye.” It’s the artistic freedom that comes when a child, unburdened by “rules” or expectations, picks up a brush, pen, or camera and works from pure creativity. The cruelty is, the harder you try to regain that freedom, the further you usually find yourself from it.

In François-Paul Journe’s early work, like his Résonance pocket watch movement in 1983 and the prototype Chronomètre à Résonance wristwatch in 1998, you see the “child’s eye” of reckless abandon – designs conscious of the depth of watchmaking history yet only preoccupied with what “could be.”

Over the years, Journe crystallized his aesthetic while maintaining his eye toward history and exacting horology. Maybe that’s what made his most recent Only Watch submissions, the FFC Blue and Astronomic Blue, remarkable – there was that freedom that most brands might struggle to maintain after decades of innovation.

With the FFC Blue, Journe teamed up with Francis Ford Coppola. Despite Coppola’s never having made a watch before, he created an idea that Journe brought to life with resounding success, selling for CHF 4.5 million at the 2021 Only Watch.

Now, less than three years after a tremendous sale of the prototype F.P. Journe Astronomic Blue at Only Watch in 2019, the Astronomic Souveraine has started to make its way to customers – only five watches so far with two under construction. The functions are the same as the Astronomic Blue (all 18 of them) and only two watchmakers are qualified to construct it, including François-Paul himself, so it should be no surprise that only four Astronomics are made each year.

Maybe it’s my interest in watches that go beyond “high complication,” but it feels like Journe was able to capture that “child’s eye” sense of wonder again with the Astronomic. Part of that likely comes from his long-time fascination with astronomical watches that, as Jack noted in his In-Depth on the Astronomic, date back to a 1979 planetarium mechanism for Asprey and an astronomical pocket watch that Journe created for “a collector of scientific instruments,” in 1987 – those days of reckless abandon with an eye toward function.

The second inspiration for this watch is more whimsical and maybe more influential to that sense of wonder. In 2004, Journe’s son Charles drew a sketch of a watch with a curved aperture that traced the path of the sun over the course of the day. But Charles doubted himself – “invented and made” was his father’s motto, after all – and he threw out the drawing. Journe salvaged the crumpled paper from the trash and immediately fell in love with the idea. It makes intuitive sense to think about a day as a smooth rise and fall with the sun, growing and shrinking throughout the seasons. It’s time as the way a child might see it.

Using the drawing as an origin worked for Journe, who often starts with the dial and works towards the movement. At first he planned to do a less complicated automatic watch but set the idea aside for a few years, returning later with a plan for a manual caliber that would allow more functions. He moved the aperture to the top of the dial, creating metal shutters that open and close to adjust the length of the day through the year. Inspired by his son, he was able to put a new function into the form that the brand has become known for.

Despite my towering frame (6’7″, so you don’t have to ask in person), I’m more comfortable wearing watches around 39mm on my 7 ¼-inch wrists. But when I closed my eyes while wearing the steel-cased Astronomic, measuring 44mm across and 13.7mm thick, it didn’t feel that much different than a lot of tool watches do on a strap. Even on Danielle, the advisor from F.P. Journe’s New York boutique who modeled for this Hands-On, the watch looked like a vintage Rolex GMT Master does on Brook Shields – it just works. The size and wearability made perfect sense when Danielle told me that Journe views this as a tool watch, its impractical but fascinating functions are philosophical tools “to recall a long-forgotten gesture: that of losing oneself in the stars in order to better find one’s way on earth.”

The impracticality of sidereal time aside (which you can read on the left side of the dial), just wearing it as you go about your day you can almost forget you’re wearing a close-to-million-dollar watch with 18 functions in a 758-part, 68-jewel, manually wound movement – a feat in itself. Each function is set solely by the crown, just like a more simple tool watch, no recessed pushers needed. And if you want even more of a “tool watch feel,” each watch comes with a matching metal bracelet.

In addition to all the astronomical functions and complications – sidereal time, photo-realistic moonphase, and the Charles Journe-inspired sunrise and sunset aperture on the front, plus the equation of time, annual calendar with zodiac at the back – there’s the more classically functional mean (standard) time and second time zone hours at three o’clock, with natural dead-beat seconds, power reserve, and central minutes on the dial, a dial which is surprisingly easy to read for all its complexity. The dial, which on the sample watch shifts from blue-grey to a more warm sandy-grey in the light, can be customized by each client – either gold, lacquered, or galvanized – subject to Journe’s approval to keep it in line with the brand’s identity.

And of course (and I hope you read that with some sort of snooty air), there’s a sixty-second tourbillon with remontoir d’égalité that powers the natural dead-beat seconds, viewable through the display caseback but not prominent, and a minute repeater with the smoothest slider I’ve ever experienced. The repeater chimes out bright thanks to the patented flat gongs and the case which, like with the Sonnerie Souveraine, is in steel, a metal picked for its elasticity and low damping capacity.

In a watch that’s true focus is astronomical timekeeping, the tourbillon, repeater, and fine finishing on the movement certainly aren’t the stars of the watch (no pun intended), but why not include them? Even as “bonus” complications, the dead-beat seconds (thanks to the tourbillon with remontoir d’égalité) and repeater are in my top three favorite complications in history. There’s something poetic about contrasting the vastness of astronomical time against the slow, jarring tick of each passing second or the intentionality required to count each chime. In the words of Danielle from F.P. Journe, they’re complications that “keep your feet on the ground while you turn your eyes to the stars.”

The Astronomic is available now – with a waiting period – on application for F.P. Journe’s most passionate collectors who are asked to make an effort to see the watch before applying. If you’re lucky enough to apply and order a watch, in addition to the other customizations, you can pick out a personalized serial number. Usually, that’s the client’s name or last name, but there are character limits so if your name is Galileo di Vincenzo Bonaiuti de’ Galilei, you may have to settle for the truncated “Galileo Galilei” that appears on the sample watch.