I love chronographs. I love watches that do things in different ways. I love the bravado of case designs from the 60s and 70s. I love the Singer Reimagined Track 1 chronographs… Well, except for their price tags, but at least there’s a reason for them. Today, I want to look a little more closely at these perhaps underrated haute-luxury watches for their cleverness, style, and, forgive the pun, the engine under their hoods, in my first “Why I Love It”.

When Singer Vehicle Design, the famed Porsche 911 modification house, announced a watch brand offshoot in 2017, I honestly don’t recall immediately taking notice. Admittedly, I’m not a Porsche-phile, which seems to be a common side affliction for watch enthusiasts, though I do enjoy cars and wouldn’t mind having a Porsche of some kind (that statement alone probably just pissed off the Porsche people in the room) in a future garage somewhere for future me. So the name “Singer” didn’t – well – mean anything at the time. But, at some point, I stopped to look at the watches, and immediately noticed they were something special, or, at least, very different. At a glance, the watches looked like three-handers with some vintage racing chronograph queues in big, brash, barrel cases. However, once the initial image settled in, the strangeness started to become apparent. There were pushers as though it was a chronograph, but they are set up at 10 and 2, like little alien antennae. The crown is then down at four. What was going on?

Well, what appears to be the three hands of a standard watch are actually all centrally mounted chronograph hands. Up to 60 seconds, 60 minutes, and… 60 hours, all told at the center of the watch. When not running and fully reset, they all line up at 12, which more clearly indicates this. So, where’s the time? Well, that is told via the rotating discs on the periphery of the dial, indicated at a line at the bottom of the watch. A novel concept, as a chronograph fan (and a die-hard for central minute chronographs) I had to know more.

While some pretty impressive things have been done with Valjoux 7750 bases by the likes of Sinn, Damasko, Tutima, and Chronoswiss (and likely many others), none, to my knowledge, have gone quite this far. Moving the minute counter to the center (where it belongs, IMHO) vis a vis the Lemania 5100? Sure, it can be done, though it’s very uncommon. Moving the hours to the center and increasing the scale to 60? Yet to see that maybe it’s not much different than moving the minutes (I’m sure any watchmakers out there are rolling their eyes). But then also decentralizing the time-telling elements to the edge of the dial, told by discs? Yeah, that’s got to be a totally new combination. A heavily reworked 7750 by chronoswiss

So, how did they do it? Well, they used the AgenGraphe. A completely novel and revolutionary take on the chronograph, the AgenGraphe is a concept developed by haute movement manufacturer and developer Agenhor in an attempt to solve one of the most basic issues of all other chronographs – legibility. Small sub-dials are hard to read by nature, and the totality of information told on a chronograph can be hard to read at a glance as its spread across several sub-dials. 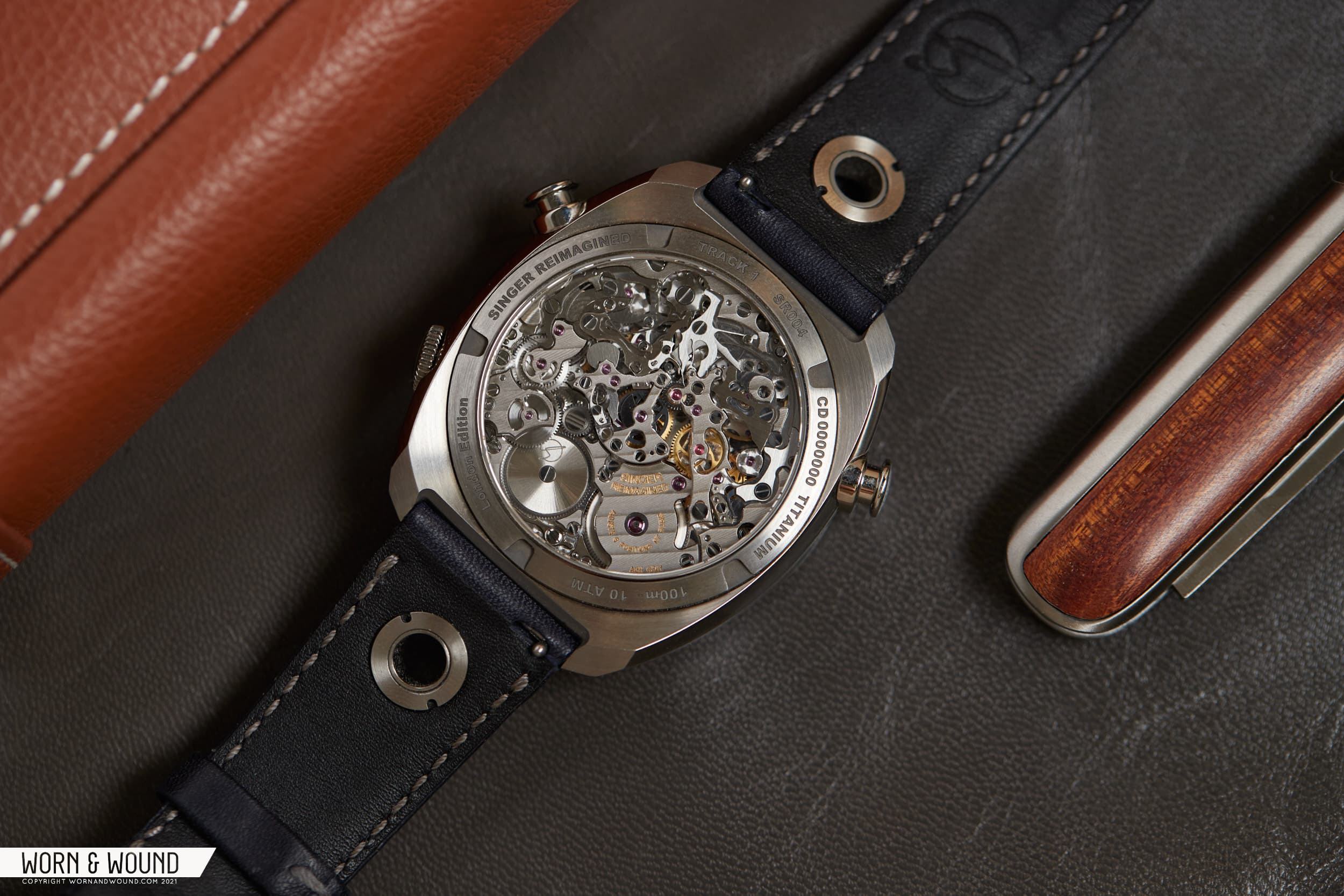 In order to solve this problem, Agenhor, who has worked on developing movements for Hermés, Fabergé, Van Cleef & Arpels, as well as MB&F, created a ring-shaped movement (patented) with a hole through the center, which acts as a space for modules, allowing for each version to be customized to a watch brands needs. For the Singer Reimagined Track 1, that means 3×60 central counters with instant jumping hour and minutes and the peripheral time display.

Composed of 477 components, including 67 jewels (as used in the Singer Reimagined Track 1), when viewed through the case back, the AgenGraphe is a piece of watch enthusiast fantasy art. Inexplicably complex, the array of gears, bridges, plates, jewels, barrels, screws, etc, is a labyrinth for the eye to navigate. In addition to the functional problems the AgenGraphe solves, there are other, more subtle solutions to be found in the movement. One is the patented AgenClutch, which provides, apparently, the best of both vertical and horizontal clutches with none of the drawbacks. Another is the AgenPit, their proprietary regulating system, and another is seen through what’s lacking. A rotor. the full view is thanks to the dial-side rotor

Well, there is a rotor, you just don’t see it. The AgenPal is sandwiched between the dial and the movement, features a design without a ball bearing and a circular aperture at its center allowing for the ring-shaped movement, and also a platinum counterweight for maximizing the mass. Fancy, but the biggest bonus is that the movement is fully visible from the backside, like a manual movement, while allowing for the modern convenience of automatic winding.

With such a complicated and high-end movement, it wouldn’t be surprising for a brand to use it to make a fussy watch, but part of the appeal of the Singer Reimagined Track 1 is that it’s decidedly not that. And considering the relationship to the world of Porsche collecting and bespoke car builds that cost a genuine fortune, that’s even more unexpected. No, instead of a Richard Mille or Hublot-esque aesthetic of high-tech materials and skeletonized everything, Singer Reimagined under the creative direction of Marco Borraccino, an Italian watch designer and former Head of Design of Panerai, paid homage to the hey-day of motorsport chronographs. Thus, the watch is less a Porsche-inspired chronograph, and an accessory to a lifestyle that likely could include a vintage Porsche.