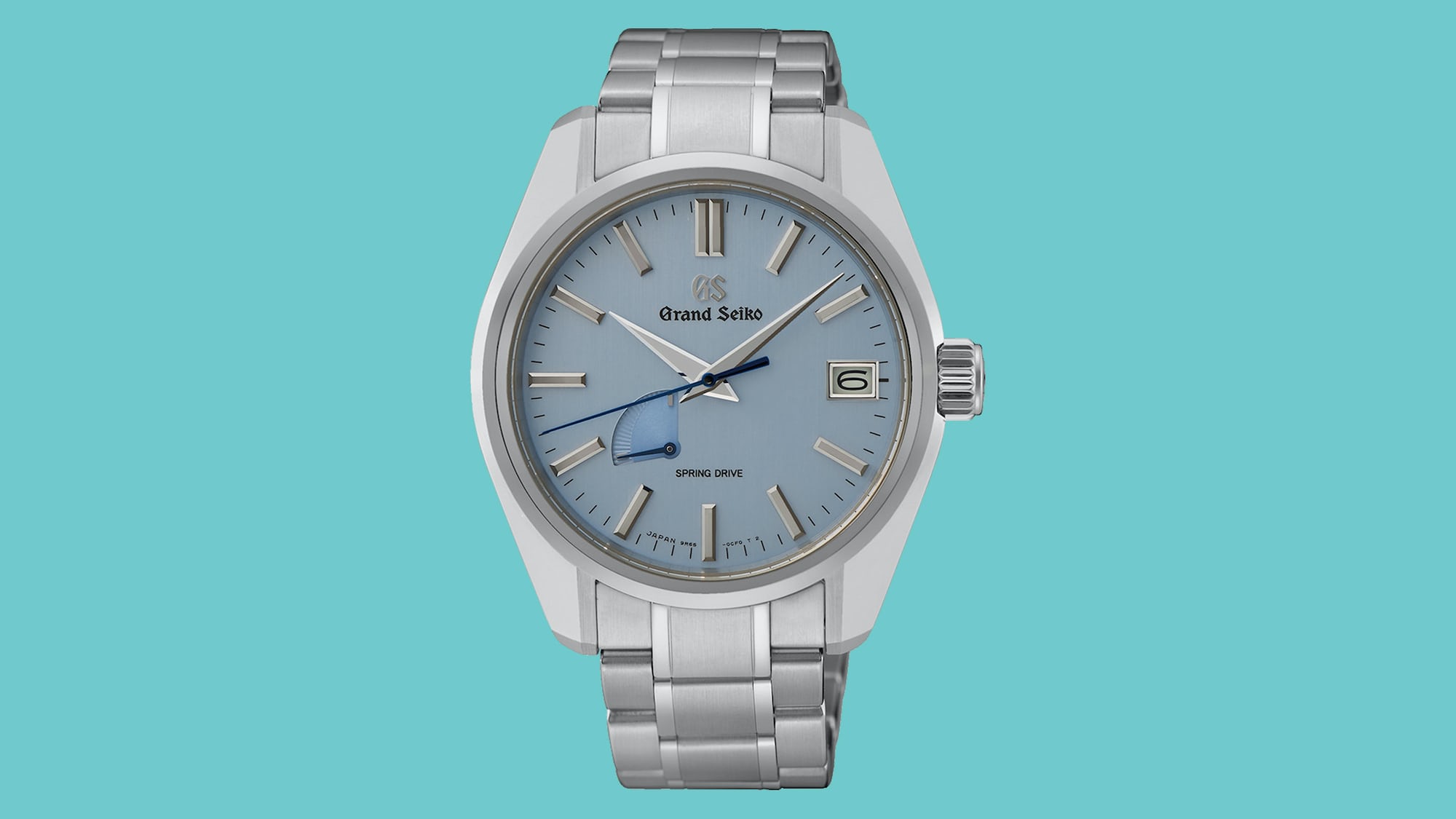 Earlier this year, as perhaps you heard, Patek Philippe released a Nautilus ref. 5711 with a Tiffany Blue dial, one of which promptly sold for $6.5 million in a morning auction that made many collectors weep into their Wheaties.

In the event that the Nautilus isn’t quite to your taste (or your budget, or your ability to dunk) we’ve found six watches that scratch a similar itch. Read on for our editors’ picks and find the blue that’s right for you.

There’s really nothing not to like about this watch. It’s a Rolex Oyster Perpetual – a 100m, prototypical watch from Rolex that represents the foundation upon which all other steel sports watches from the Crown are built. This particular dial color option for Rolex’s “entry-level” timepiece was one of a host of wild colors released by the brand in 2020. Whether it was yellow, green, coral, or this blue, all of the new OPs flew out of the stores as fast as any Submariner or Daytona. I like this one because the size is perfect, and it represents Rolex having fun with watch design. If I’m comparing it to the Tiffany Blue Patek Nautilus …. well, this one only costs $5,800 so that’s really something to consider. It may not be the easiest watch to get your hands on (what Rolex is?), but these days availability is all relative. – Danny Milton

Let’s get one thing straight: Light blue was cool well before the start of the Tiffany frenzy that’s currently taken over (and, in my opinion, embarrassing) the watch world. I’m not saying you should buy this watch instead of the Tiffany 5711. I don’t think anyone should buy the Tiffany 5711 at all. But since shades of aquamarine are now trending so hard, you might as well look at this fantastic diver by Stowa, a brand that couldn’t be further from Patek Philippe in spirit – or in price point. For less than two grand, you get a titanium case, a ceramic bezel, and a killer design that doesn’t draw the wrong kind of attention. – Cole Pennington

Halios has been working in the “pastel blue” space since the early days of the Seaforth. In fact, my first ever story for Hodinkee was a Value Proposition for my pastel dial Seaforth with the wonderful 12-hour bezel. During the early days of the pandemic, I auctioned that watch in support of charity but later found that I missed the pastel blue coloring even more than I expected.

Thankfully, Halios continued to use the color and I was able to get my hands on a wonderful 38mm series 1 Universa with the dial my heart so desired. I can’t think of a watch in this color space that I like more at any price, much less under a thousand bucks. It’s not too big, has a great bracelet, is only 11mm thick, boasts a nice Swiss hand-wound movement, and lights up with bright lume. Series 1 Universa’s have long since sold out, but if you don’t want to hit the second-hand market you can keep an eye out for news of a second series on Halios’ Instagram. – James Stacey

Before we’ve even had a chance to blink the green out of our eyes, the year of the light blue watch dial is upon us. If you’re going to opt for a distinctive hue in a watch dial, why not tap a brand that excels in the dial department? The recently launched SBGA471 from Grand Seiko has a frost-blue dial endowed with faint vertical striations. The subtle markings paired with a distinctive color are classic Grand Seiko, as are the immaculate, diamond-polished hands and indexes. The inspiration comes from the frozen bamboo trunks of Arashiyama, on the outskirts of Kyoto, in late fall/early winter, but I’d excitedly wear it all summer. – Jon Bues

An Ice Blue: Breitling Chronomat B01 42

Have you ever felt like you’ve developed Stockholm Syndrome over a specific watch? That’s how I feel these days about the ultra-aggressive, hyper-masculine aesthetic of certain Breitlings like the Chronomat, Avenger, and Colt. For years and years, I never understood the appeal. I dismissed them as “for a different type of watch enthusiast.” The rider tabs were grotesque bumps interrupting the bezel design, and the over-the-top “flyboy” aesthetic was just too much. And then Breitling came out with the 2020 update, and it all clicked. The rider tabs were now cool to my eye; the onion crown felt appropriate and less like an abscess, and the rouleaux bracelet brought an impressive fluidity to the entire design. I was, in a word, charmed. And the one that has continued to haunt me happens to feature a reflective “Ice Blue” dial and a platinum bezel insert. Still, I’d call it more Teterboro than Tiffany. – Logan Baker

If I never have to type the words “Tiffany Blue Watch” ever again it won’t be long enough (he said, watching the Hype Train chug merrily into the sunset). You want blue? Fine. Here you go. This is the blue-est ass watch you could ever hope to see – and not only will it not make you wish you’d decided to be a hedge fund manager (or whatever) when you look at the price tag, it won’t even set you back the price of dinner for two. Or drinks for two, as far as that goes. Skittish about wearing a “Baby” G-Shock? I know a guy who knows a guy who says that special operators like them because they’re tough and not too bulky (although maybe not in this exact shade of extremely high-visibility blue) so put that in your pipe and smoke it. – Jack Forster

The HODINKEE Shop is an authorized retailer of Breitling, Grand Seiko, and G-Shock, with plenty of pre-owned and vintage Rolex rolling around, too.