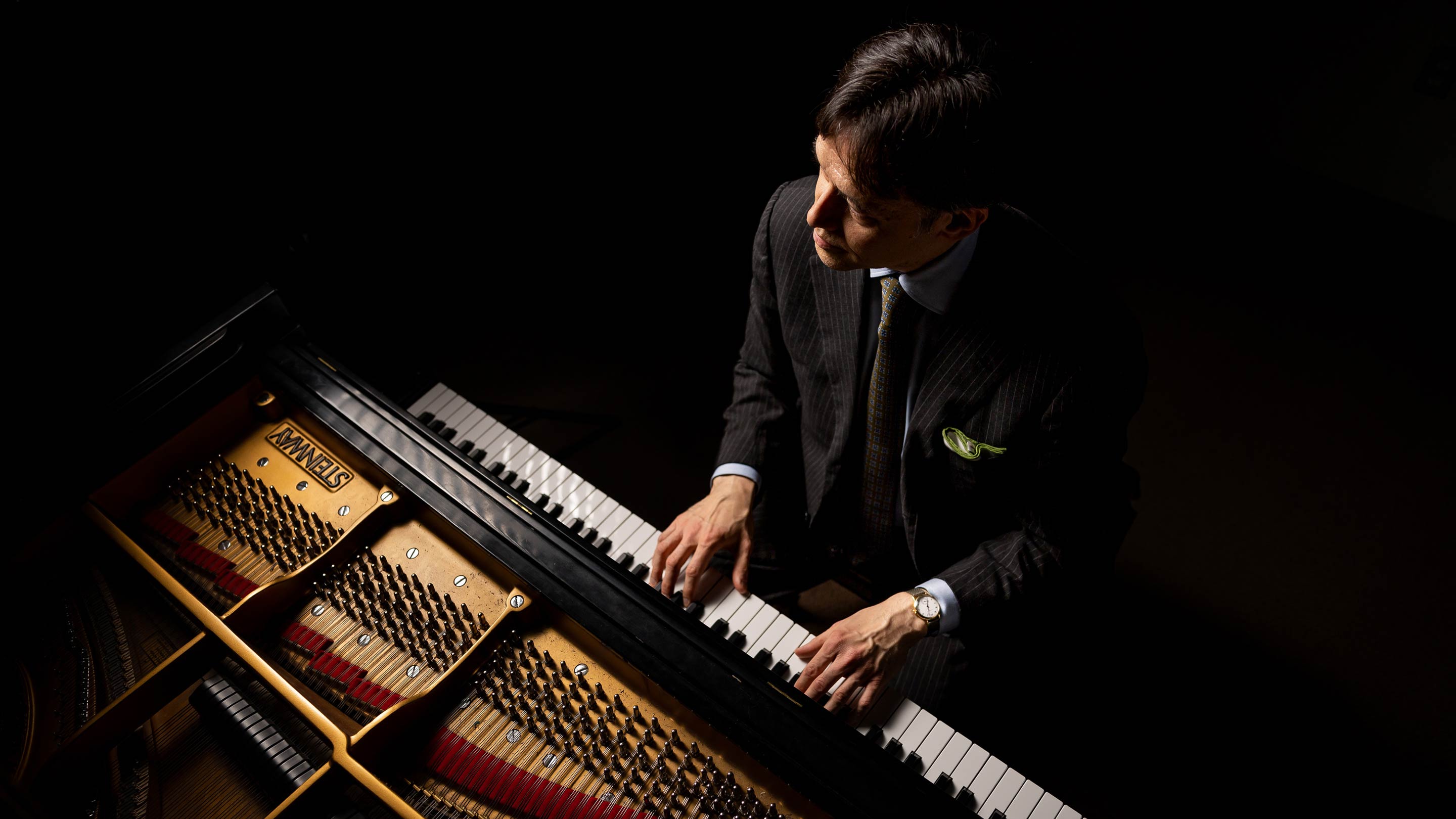 When Koji Attwood was in kindergarten, his teacher noticed he had a problem. He had trouble writing, using scissors, and tying his shoes. To help improve his hand-eye coordination she suggested he try playing the piano.

Now 49, with a PhD degree from Juilliard and many solo performances at Lincoln Center under his belt, Attwood is still playing piano. He’s a professor at the University of Utah, where he specializes in transcribing music for piano solos, from music that was originally written for other instruments. “This way,” he says, “I’m able to experience it as an active participant rather than just a listener.” He has no problem tying his shoes.

Born to a Japanese mother and American father, Attwood grew up in the small town of Lawrence, Kansas. When he was young, neighbors would come out of their homes just to watch him and his mother walk down the street because they’d never seen a Japanese person before. But it wasn’t all bad: “People don’t believe me when I tell them this, but the public school system in Kansas, at least when I was there, was excellent and had a lot of really great teachers.”

And that one kindergarten teacher charted the course that shaped the rest of his life. He learned piano using the Suzuki method of studying, treating music as if it were a foreign language. Neither of his parents were musical (in fact, his father wanted to give him golf lessons instead of piano lessons), but Attwood does have one musical connection: “A great-great-great-great grandfather, Thomas Attwood, who studied with Mozart.”

While it was his kindergarten teacher who got him into piano, it was his grandfather who got him into horology. As a young child he was fascinated by the mechanics of his grandfather’s pocket watches. It’s no surprise that a pianist would be enamored with the way a movement works. A piano has over 10,000 pieces that come together to form the “piano action” and create the distinct “voice” of each piano. And a high quality piano wears a lacquer finish that’s just as precisely applied and tidy as the mechanics inside.

Attwood’s collection reflects this merger of external beauty and internal precision. Every piece boasts an elegant aesthetic powered by an exceptional caliber. Some enthusiasts simply let the current collecting zeitgeist inform their acquisitions, but Attwood doesn’t care about what’s hot or trendy. He’s put together a collection that spans an entire century, but is tied together by a unified theme: Compact, refined, and unusual. Here are four watches of note, plus one treasured book, from his collection.

“I was feeling a little guilty about not having a Japanese watch, considering my heritage,” Attwood says. “In my teens I had a Seiko, but nothing since.” So he started looking into the Seiko Presage line, which led him to Grand Seiko and its Spring Drive movements. It turns out the Spring Drive has an interesting parallel in the piano world. “It’s funny, there’s a Yamaha piano that’s sort of a hybrid between acoustic and electric that’s called the Avant. And it very much reminds me of the Japanese way of dealing with that engineering issue – neither one or the other.”

Attwood’s the kind of guy who gets into something and can only consider it done when it’s pursued to its absolute end. Beyond Grand Seiko is Credor, a Seiko sub-brand that specializes in hand-finished watches that embody the ultimate in Japanese craftsmanship with a mesmerizing aesthetic. And so he settled on a beautiful Credor featuring a “Raden” dial. The markers are hand-drawn and the celestial pattern just above six o’clock is hand-inlaid material covered with several coats of lacquer.

Attwood spent two years researching the piece, which he eventually sourced from a Belgian dealer who had it sitting in a safe. “It’s ludicrously small. I think it’s 33 millimeters if I’m being generous,” Attwood says. “And I’m flabbergasted that they were able to cram all that information on that dial back then.”

The Universal Genève caliber 281 inside the watch was first introduced in 1932 and boasted a Breguet hairspring and column-wheel chronograph complication. He utilizes the functionality of the watch’s movement by timing things like “piano practice or making coffee in the morning. It’s a tool watch for me, but there’s also just something very romantic about it.”

“AP makes lovely watches, even if today it’s just about the Royal Oak. I think the late ’90s and early 2000s tick all the boxes, for me, at least,” Attwood says. “I think that the movement is beautiful, it’s all about that unusual balance bridge in the back. It’s hand-wound, kind of a slower beat. You can actually see the balance wheel in motion.”

He even takes it with him on stage.

“It’s a perfect playing watch. It’s just the right weight. It’s got the right heft but it’s not too heavy. It’s right at that sweet spot for me. Not too big, not too small, 36 millimeters. It’s perfect.” COVID-19 has certainly put a damper on his performing, but recently Attwood had the opportunity to perform for a good cause: “I performed out in California back in December. It was a benefit concert, raising money for families of the firefighters who had died in the past year.” The AP was on his wrist for the performance.

“This watch has a hinged case, Breguet numerals, Breguet hands, fixed lugs, and an enamel dial. It’s so old that it says Vacheron and Constantin,” Attwood says. He won the watch in an online auction, and only one other person had bid on it. There was a crack in the enamel dial and it came with the original strap, which proved to be uncomfortable to wear as it was disintegrating. Attwood had a custom strap made for it to look period-correct.

And like all of Attwood’s pieces, there’s a musical connection. “If I’m practicing Rachmaninoff or something from that era and I look down on my wrist I’m always thinking, ‘Wow, Rachmaninoff could have been wearing this watch.’ It’s that old. And it’s really a nice connection to that era and, again, it represents the very romantic idea of what watches were back then. They were just different.”

Dark Side of the Museum, a novel by Randy Attwood (Koji’s dad)

“In order to get a certain amount of time in, I had to practice before school, growing up. That meant waking up at 4:30 in the morning. My father woke up at the same time in a show of solidarity, and that’s when he’d write his fiction.” Now, years later, after his retirement, Randy Attwood published Dark Side of the Museum, a novel that’s informed by his years as a public relations officer at an art gallery in Kansas City.

There’s even a character that’s based on Koji, himself. “Looking at that novel, I remember having to wake up at 4:30 in the morning and practicing before school. And then of course, right after school, I’d have to go and practice some more. That was my existence for so many years.”

For more information about Audemars Piguet, Credor, Jaeger-LeCoultre, and Vacheron Constantin, visit their websites. The HODINKEE Shop carries pre-owned and vintage watches from these brands and others; explore the collections here.