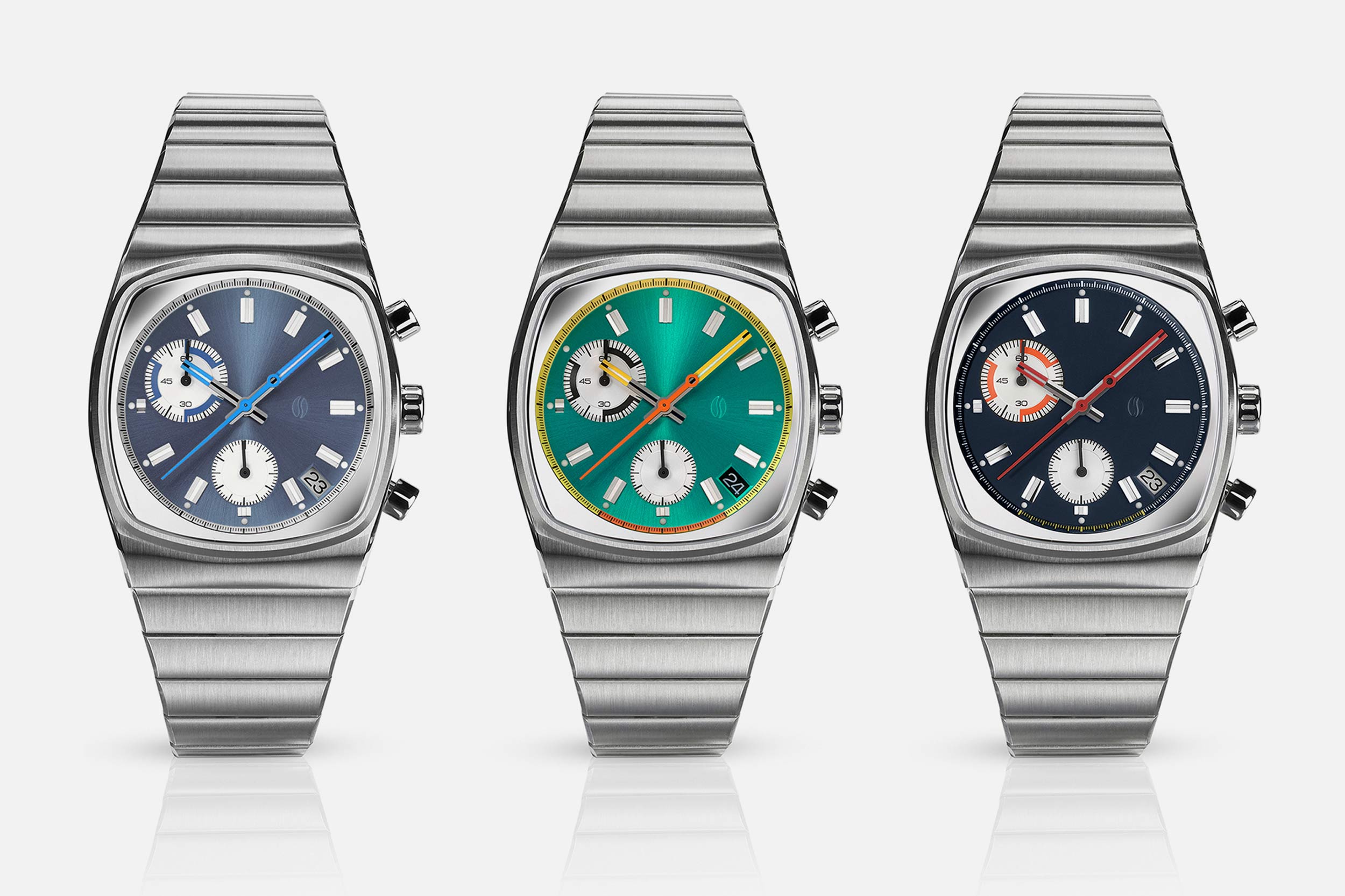 Since Brew’s Metric Chronograph was released last summer, it’s become something of a viral sensation. The watch has become a social media hit, with new batches selling out almost immediately, and it’s brought a newfound (and long deserved) recognition to Jonathan Ferrer’s espresso inspired, design forward watch brand. The funky 70s inspired case and a spirited use of color has struck a chord, and now only a matter of months since the launch of the Metric, Brew is back with a trio of new colorways that are equally as charming as the original variants. Now there’s a Metric for (almost) everybody. When Brew began teasing the new Metrics last week, they led with what is likely the most dramatic of the bunch, a dial in an impossibly bright, almost neon, shade of green. This new dial is set off with white subdials and accents in yellow and orange. It’s a combination that you wouldn’t necessarily think would work on paper, but the execution here is predictably on target and the watch somehow comes together coherently. It’s adventurous to be sure, but if you’re looking to really make a brightly colored statement, this is the Metric for you. The other new variants are a little more subdued, and are comparable to the original steel dialed Metric, which served as a sober complement to the colorful “Retro” dial, which is the one that really took over the microbrand conversation for a hot minute last year. The new dials in navy blue and a paler, metallic, sunburst blue seem like more logical choices for those who want to wear their Metric daily, and perhaps have a desire to match their watch dial to the rest of their wardrobe. Personally, I don’t know what that’s about. I was once told that a businessman matches his socks to his suit, and a gentleman matches his socks to his mood, and that’s been my philosophy with watch dials as well. How’s that working out? Well, I clash a lot, but I work from home, so nobody really has to see it. But back to the new Metrics, both the navy and blue dials underline how versatile the design of this watch really is, which is a neat trick for something that initially reads as a bit unusual. One can imagine Brew iterating on this basic format almost endlessly, experimenting with both avant-garde and more traditional colors, textures, and combinations. The design works remarkably well whether it’s stripped down and simple, playing with multiple tones of blue, or a little more playful, using unexpected contrasting elements to draw the eye to different corners of the Metric’s dial. On the inside, of course, nothing has changed. The Metric is still powered by a Meca-quartz movement with a somewhat unusual layout that sees a minute totalizer between 9:00 and 10:00 and a running seconds display at 6:00. You’ll see the seconds tick by one by one in the fashion of a typical quartz watch, but the chronograph behaves just like a mechanical, with the instantaneous snap-back on a reset and the tactile feel you expect on a mechanical chrono. Specs on the case are unchanged, as well, with the Metric coming in at a comfy 36mm in diameter.

The retail price on the Metric is $395, and they’re available (for now) on Brew’s website right here.