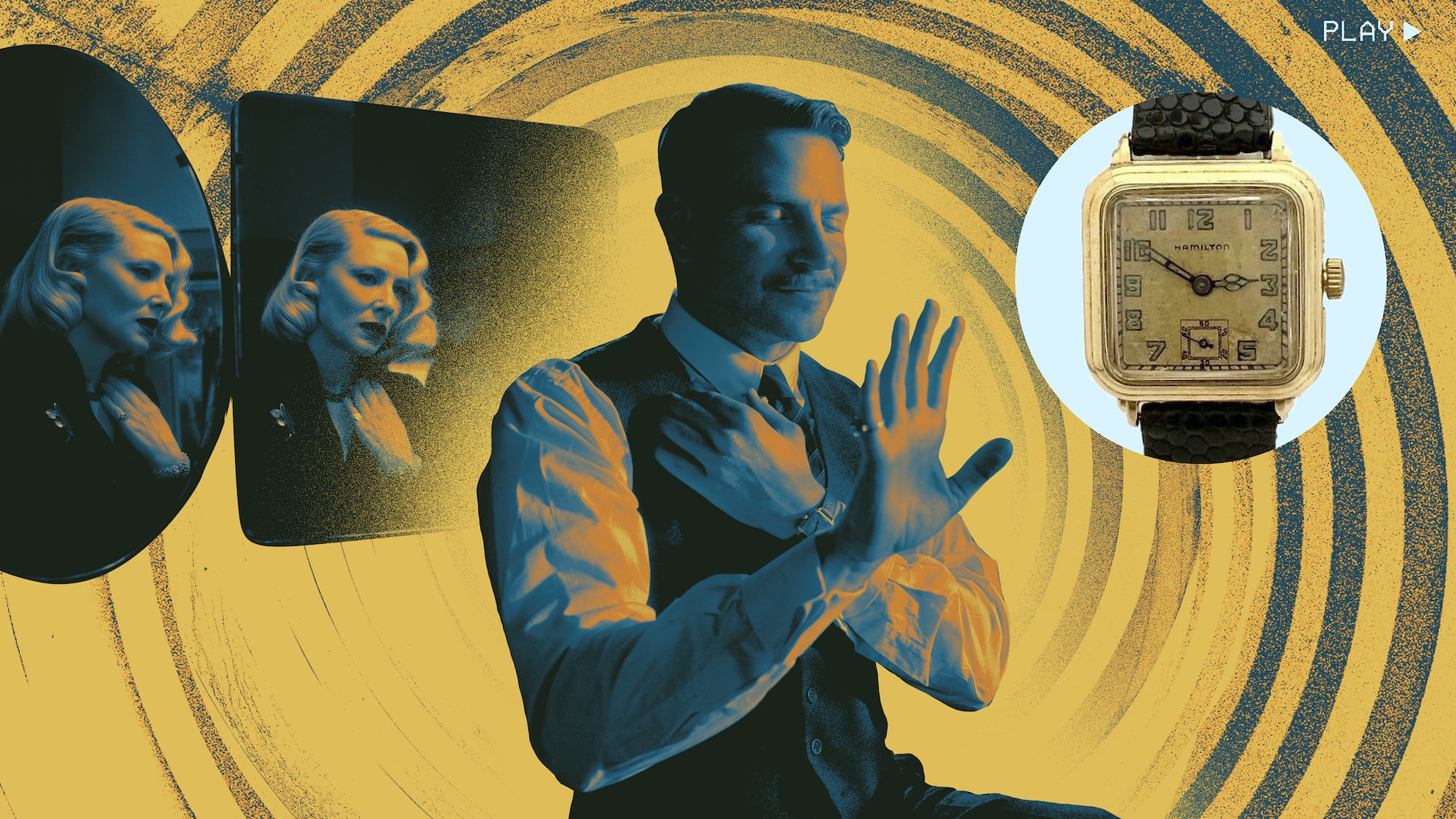 After a brief hiatus and some much-needed R&R, Watching Movies is back in full force for 2022. To kick off the new year, I thought it would be nice to set our sights on a film released right at the tail end of 2021.

It’s a rather dark piece of cinema from visionary director Guillermo Del Toro that puts leading man Bradley Cooper at the center of events that touch on the macabre, the magical, and the mechanical (watch puns are in this year).

It’s called Nightmare Alley (2021) – a reimagination of a 1947 film, which itself was an adaptation of a 1946 novel, all of the same name. The story centers on Cooper’s character, Stanton Carlisle (a noir name if there ever was one), who joins a traveling carnival, slowly learning the art of mentalism and criminality. When trouble hits the show, he and his love interest Molly Cahill (played by Rooney Mara) flee for the big city, and he takes his mystical talents from the tent to the cosmopolitan supper club.

All the while, he wears a particular square-shaped, vintage American timepiece fit for the silver screen.

Nightmare Alley has been on my radar since late December … 2020. That’s when I interviewed Maria Simonelli, the film’s Assistant Prop Master and learned that the film’s production was hit with a six-month delay due to COVID.

Fast-forward to 2021 and I was able to attend the U.S. premiere in early December, where Del Toro spoke to the audience, alongside the cast and crew, after the conclusion of the film. Both he and the film’s producers touched on how lucky they were to get the entire cast back to finish literally half of the film and not be impeded by scheduling conflicts.

As Carlisle, Cooper uses his powers – or “powers” – to swindle the rich and powerful while also falling for (in more ways than one) a nefarious therapist, Dr. Lilith Ritter, played by the great Cate Blanchett.

Considering that this is a new film that has been removed from many theaters due to poor box-office returns (we can thank Spider-Man for that), I won’t spoil what I believe to be one of the higher-quality cinematic offerings I’ve come across in the last 24 months. I’ve no doubt this film will be a player come awards season.

The production design, the costumes, and the acting are top-notch. And then there’s the watch.

Throughout the film, Carlisle wears a 14k-gold Hamilton Hastings model circa 1928, dating back to when Hamilton was still an American brand based out of Lancaster, Pennsylvania. It has since been acquired by the Swatch Group and operates out of Switzerland (but still makes great watches).

Carlisle wears this watch from his humble beginnings to his rise up the social ranks. As with most films, it’s not about the watch itself, but the story behind it. In this case, the Hamilton belonged to Carlisle’s deceased father, a character who looms large in his life. He wears it as a way to remember the loss of his dad – and he carries it with him wherever he goes. In many ways, the emotion within the beating mechanical heart of the watch informs every decision he makes – right and wrong (mostly wrong) – for the duration of the movie.

When I caught up with Simonelli after the premiere, she told me that Cooper’s relationship to this Hamilton had an equally interesting off-screen story.

There was a little incident involving the Hastings during the cleaning of Cooper’s trailer as part of the film’s COVID protocols. “During that process, the watch fell off the tray it was resting on, and the crystal broke,” Simonelli recalls. “We had four watches – one hero watch, and three others used for stunts and wider shots.”

After the crystal incident, Simonelli arrived on set for a scene and handed Cooper one of the secondary watches.

“He said thank you and I walked away. Within five minutes I got called back by Cooper and Guillermo and he said ‘Is this the original watch?’ to which I said, ‘No … it got broken today,’ and he said ‘Well, it’s got to be the original, we have to get me the original.'”

He wasn’t being a diva. He was being a watch lover. Del Toro, for his part, laughed and said, “I can’t believe he noticed.”

Simonelli went on to tell me that this wasn’t the only horological focus point in the film. Del Toro also wanted to make sure that the watch worn by Cate Blanchett had a black strap to reflect the nature of her character.

One very cool piece of information she shared with me is that, at the end of the shoot, Del Toro kept the Stanton Carlisle Hamilton for his personal collection of cinematic ephemera.

I’m a big proponent of the lasting power of timepieces, especially when they become heirlooms. Nightmare Alley really brings that idea to the forefront, both on- and off-screen. If you’re a watch lover (I mean, you’re here, so I assume you are) you’ll appreciate the attention that’s been paid by Del Toro and crew.

The film centers largely around Carlisle’s relationship with Mara’s Cahill (and later, Ritter). We follow them as they fall in love under the bright lights of the carnival scene and run off together to forge a new life. They become a real team, both romantically and professionally, as Cahill helps Carlisle get his mentalist act fully legitimized.

The film jumps from their carny act to a time when they’re commanding high net-worth crowds in art-deco clubs. It’s there that we find the two in their dressing room preparing to take the stage. As they sit in one of the most beautifully set-decorated rooms in recent cinematic history, Carlisle’s gold Hamilton is clearly visible, both on his wrist, and in the makeup mirror in the front of the frame. It’s obvious from its on-screen prominence that we’re meant to notice. For horologists and cinephiles alike, that’s all we can ever ask for.

Again, without spoiling, Carlisle takes what should be a parlor trick (mentalism) and turns it into a con act. He befriends local therapist Dr. Ritter, who has a cadre of high-paying clientele. She trades him information about her patients in exchange for a cut of the profit. Carlisle proceeds to take that information and use it on individuals to help them cope with the loss of loved ones. In one such scene, we find Carlisle in the home of Mrs. Kimball, played by Mary Steenburgen, wife of a prominent and powerful judge. As he uses his “abilities” to speak with her deceased son, the Hamilton Hastings can be seen on his very active wrists. Magic is, after all, the art of distraction.

HODINKEE is an authorized retailer of Hamilton watches. Explore our full collection here.