Unlike most other luxury watch brands, Rolex does not make limited-edition models, nor does it team up with big-name celebrities to produce collaborative editions (with the one exception being the Deepsea with D-Blue dial that was created as a tribute to James Cameron’s historic solo dive to the bottom of the Mariana Trench). However, Rolex does occasionally make special commemorative editions to mark the major anniversaries of some of its most iconic models. While these Rolex watches do not have any markings explicitly stating that they are commemorative editions (other than frequently featuring the color green), they were all indeed launched in honor of a specific milestone anniversary.

Let’s take a closer look at a few of the most famous and collectible Rolex anniversary models and discover what it is about them that makes them special. 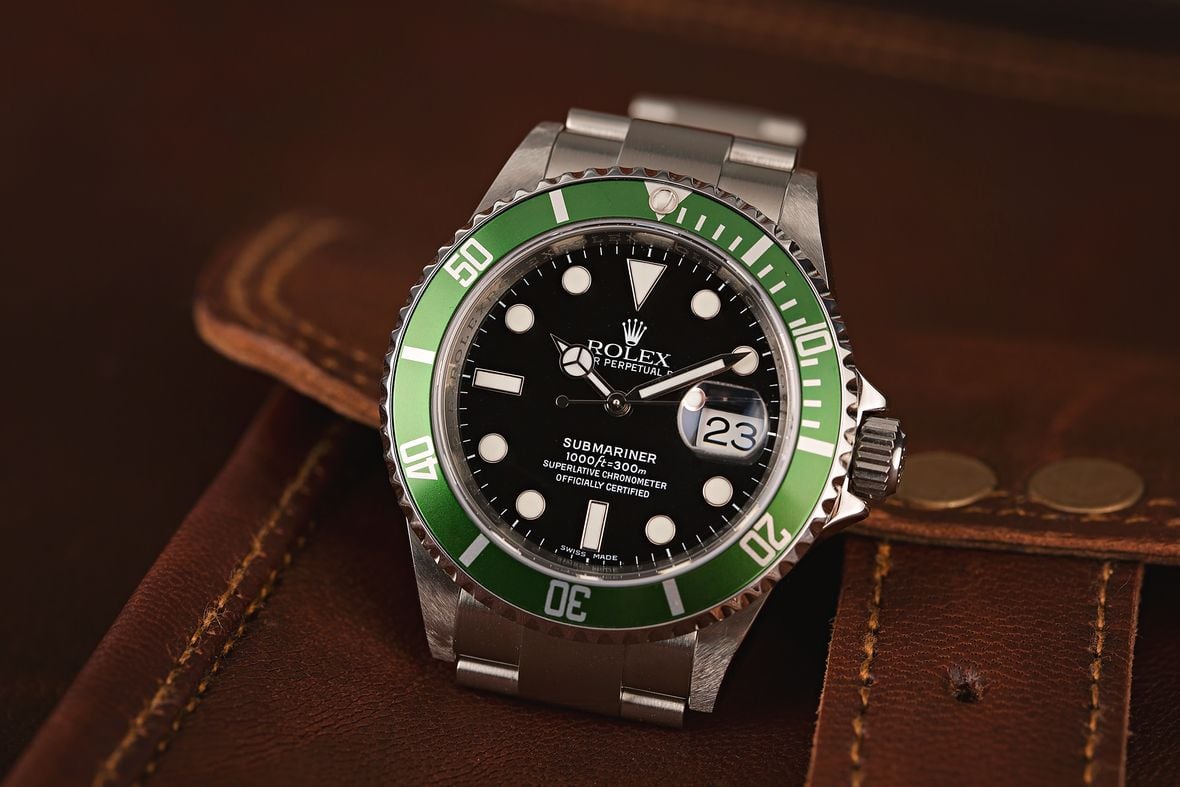 The Rolex Submariner was first launched in 1953 as one of the world’s very first dive watches, and to celebrate the collection’s 50th anniversary in 2003, Rolex released the reference 16610LV. In terms of its core design and functionality, the Submariner 16610LV is identical to the standard ref. 16610 and features the same 40mm stainless steel case and Caliber 3135 movement. However, where it differs from the standard Submariner 16610 is when it comes to its dial and bezel.

While the dial of the Rolex Submariner 16610LV is still black with luminous hour markers, it represents the first modern Maxi dial, which is a style characterized by larger hands and hour markers (like the ones found on subsequent generations of the Submariner and other Rolex sports watches). Additionally, the most striking feature of the 50th Anniversary ref. 16610LV is its bright green aluminum bezel, which represents the first time that a stainless steel Submariner has featured any color other than black, and also the first time that the color green (Rolex’s signature hue) has appeared on its iconic line of dive watches. Due to its green and black color profile, the reference 16610LV quickly picked up the nickname the “Kermit” and although this colorway was brought back for the current-production ref. 126610LV, the original reference 16610LV will always hold a special place in the hearts of collectors for being the 50th Anniversary Rolex Submariner. 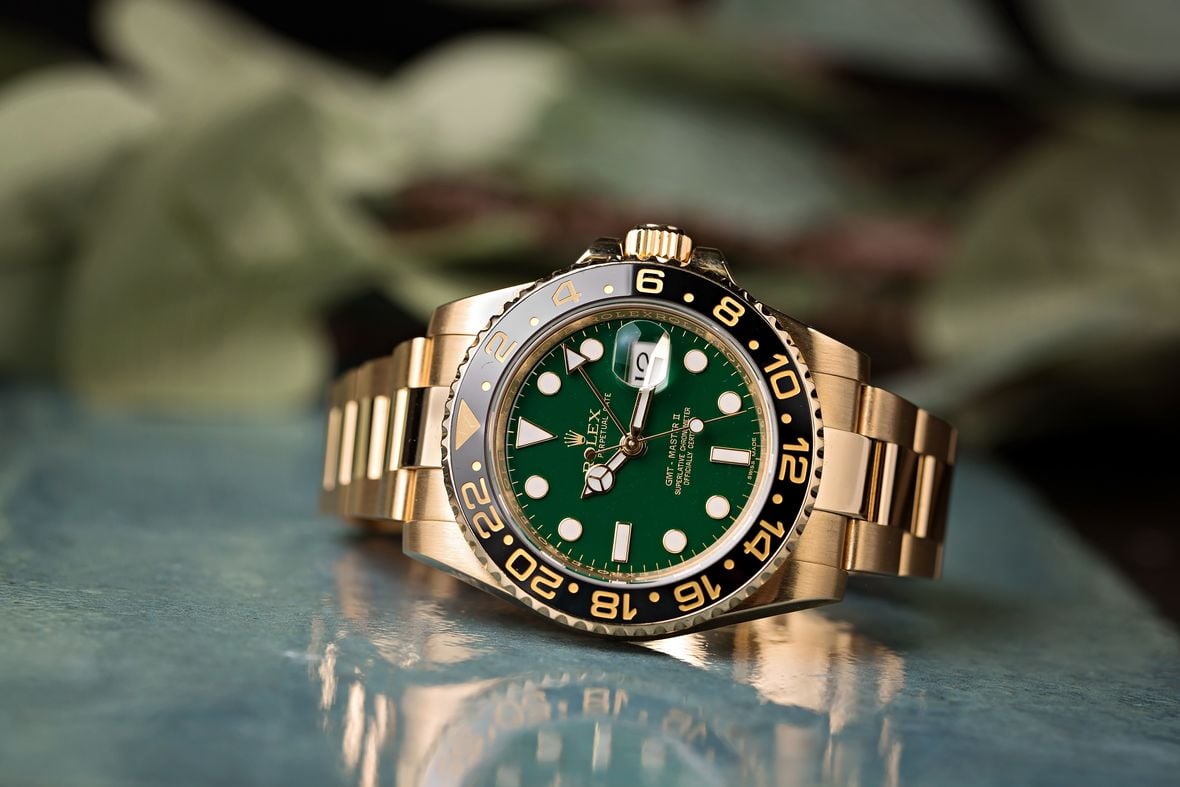 The very first Rolex GMT-Master was released in 1955 and although it was ultimately discontinued to make way for the more-capable GMT-Master II, most collectors (and even Rolex) view the updated model as a continuation of the original collection. To celebrate the 50th anniversary of Rolex’s iconic multi-time zone pilot’s watch in 2005, Rolex released the GMT-Master II reference 116618LN.

Fitted with a striking bright green dial (although a black option was also available), the GMT-Master II 116618LN ushered in a lot of firsts – both for the GMT-Master II collection and for Rolex as a whole. Not only was it the first instance of Rolex’s updated “Super Case” design with thicker and more angular proportions, but it was also the first watch to feature a bezel made from Cerachrom – Rolex’s proprietary ceramic material, which would later make its way onto the Submariner, Daytona, and Yacht-Master collections. Additionally, the 50th Anniversary GMT-Master II 116618LN represents the one and only time (thus far) that Rolex’s legendary travel watch has been available with a dial in the brand’s signature company color, making it a standout model and a top favorite among many collectors. 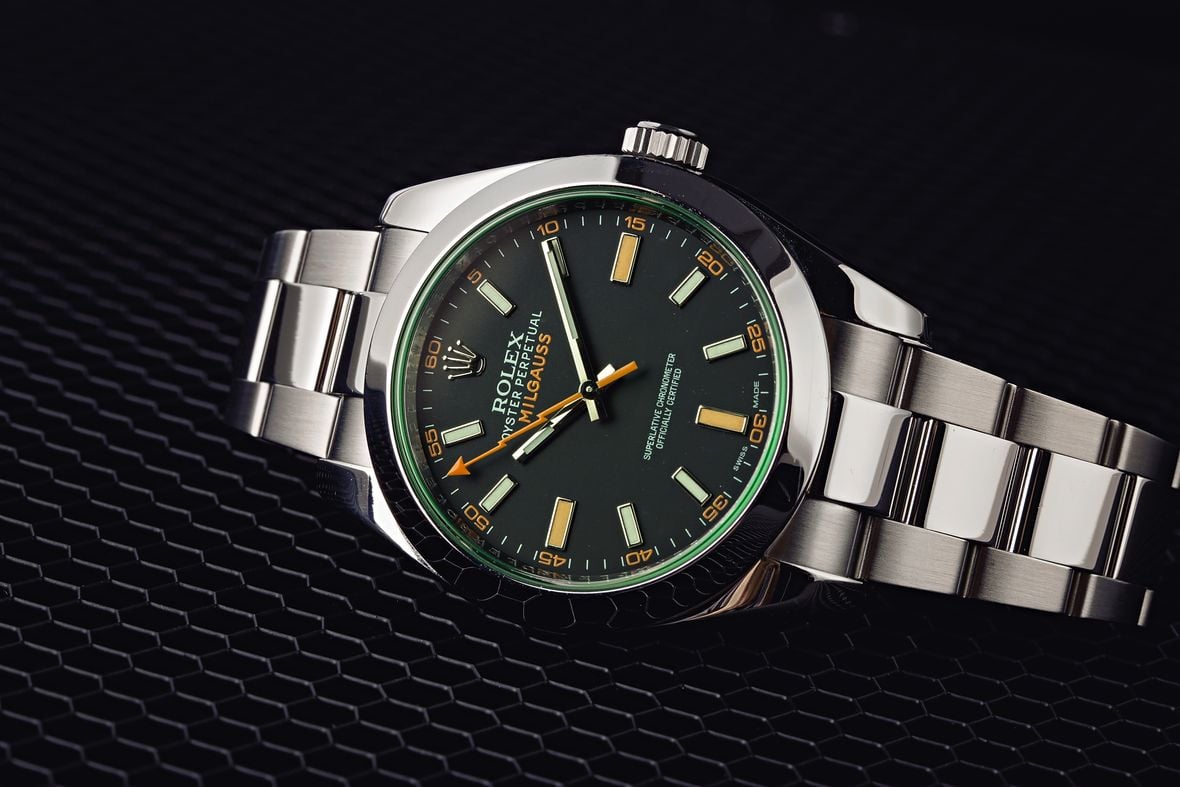 First launched in 1956 as a watch for scientists and laboratory technicians, the Rolex Milgauss features an internal antimagnetic shield that allows it to be resistant to magnetic fields in excess of 1,000 gauss. When the model was revived in 2007, the collection of three pieces featured an unusual model that quickly started being referred to as the 50th Anniversary Milgauss, the reference 116400GV.

Alongside traditional models with either white or black dials was an additional black dial variant that featured a unique green-tinted sapphire crystal. To this day, the Milgauss is the only Rolex watch to feature a colored crystal above its dial, and this unique trait has since become one of the hallmarks of the collection, with the current-production models both featuring green sapphire crystals (now with the option of either black or Z-Blue dials). What is most interesting about this model, is that the reference 116400GV actually appeared one year after what would have been the 50th anniversary of the collection, but the “Anniversary-Edition” moniker stuck and it stands out as one of the most unusual and aesthetically-striking Rolex watches available. 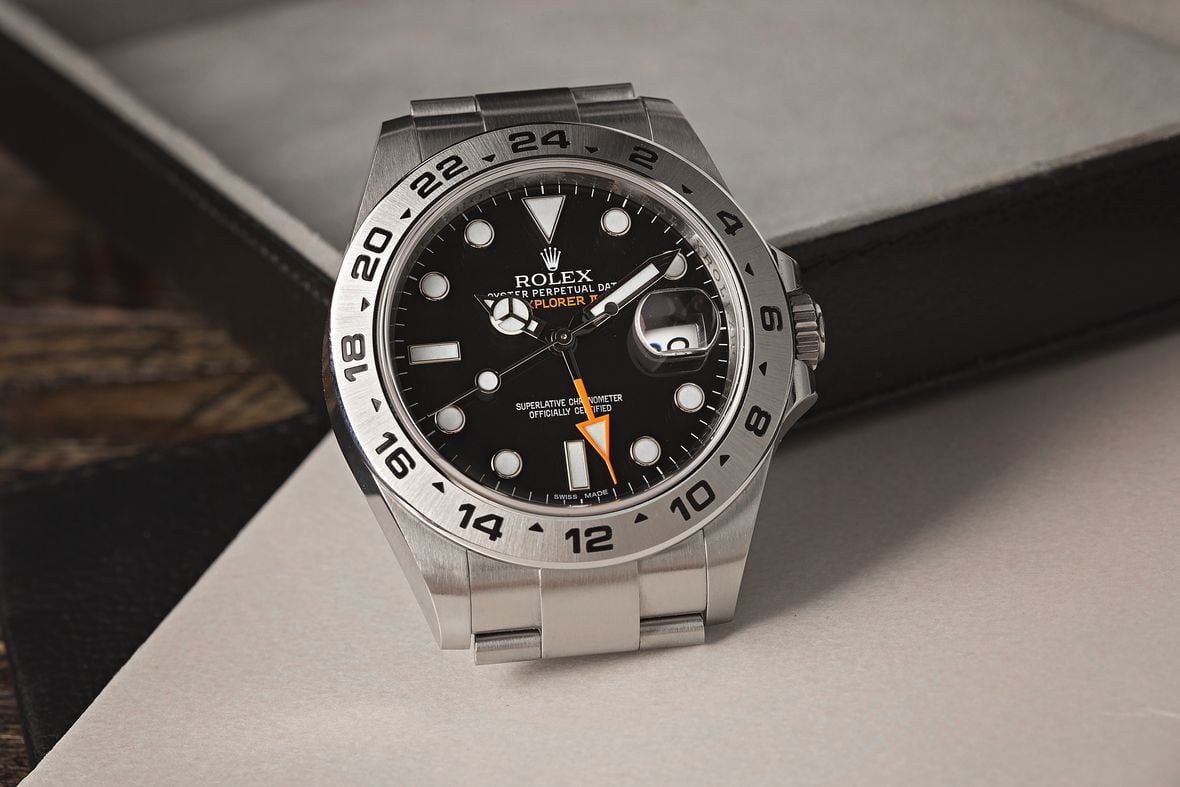 Launched in 1971 as an extension of the existing Explorer collection, the Rolex Explorer II was specifically designed for spelunkers (cave explorers) operating in environments without any sunlight. Over the years, the Explorer II has evolved, gaining the ability to display two-time zones and the option of either a white or black dial. To celebrate the collection’s 40th anniversary in 2011, Rolex released the reference 216570 as an entirely new generation of Explorer II watches.

Just like before, the watch was available with either a black or white dial; however, the case had grown to 42mm in diameter and it had also received the updated Caliber 3187 movement. Arguably the most noteworthy aspect of the 40th Anniversary Explorer II was its bright orange 24-hour hand, which was a direct throwback to the design of the one found on the inaugural model from the 1970s. Additionally, when the 50th anniversary of the Explorer II rolled around in 2021, Rolex barely changed the design of the watch, only tweaking minor design elements and adding an updated movement, which makes the 40th anniversary Explorer II 216570 stand out even more within the overall history of this purpose-built collection. 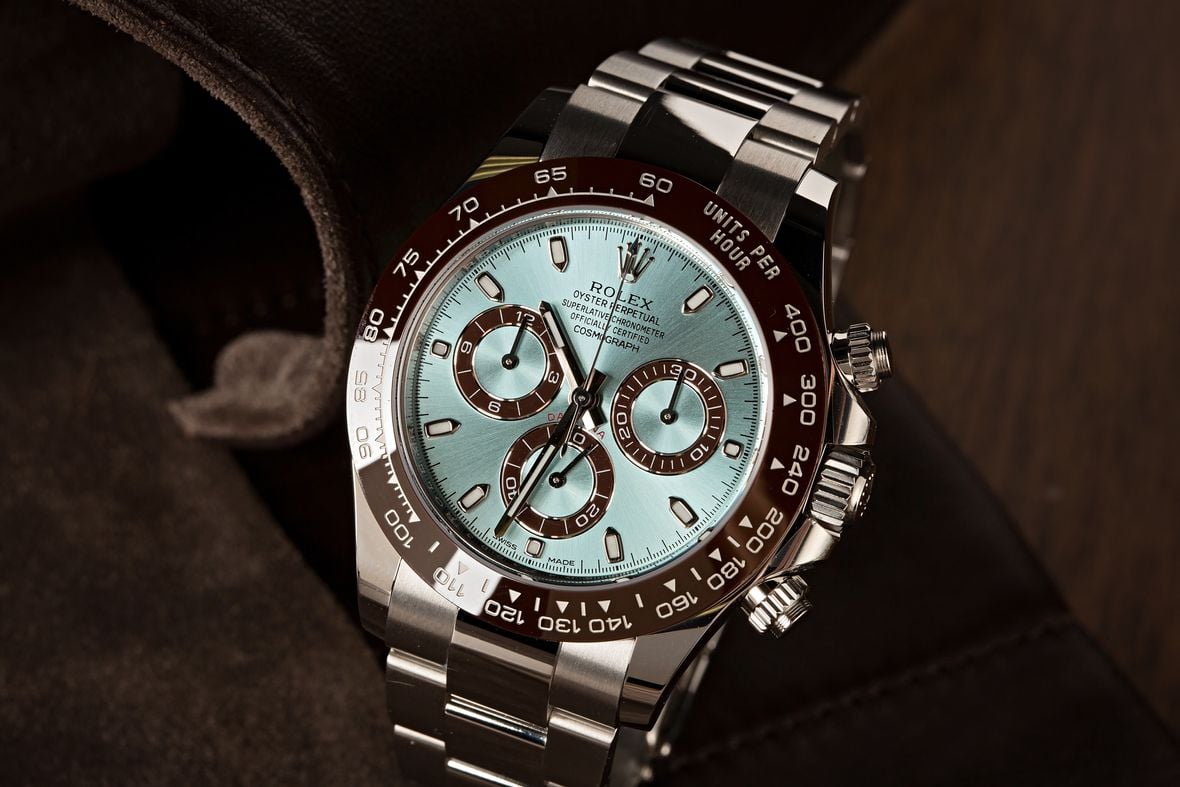 Rolex has a long history of making chronograph wristwatches; however, it was in 1963 that the brand’s most famous chronograph of all time – the Rolex Daytona – would make its first appearance. Despite the fact that the very first Daytona watches didn’t even feature the “Daytona” name on their dials, 1963 marks the official start of the Daytona collection, and to celebrate the model’s 50th anniversary in 2013, Rolex released the solid-platinum reference 116506.

Instantly recognizable due to its chestnut brown Cerachrom bezel and striking Ice Blue dial (a feature only reserved for platinum Rolex watches), the Rolex Daytona 116506 is easily one of the most famous and unusual executions of the brand’s iconic racing chronograph. While the core design of the watch is very similar to other modern Daytona models and it is even powered by the same in-house Caliber 4130 movement, its unique color profile and full-platinum construction instantly set it apart, and make it one of the most exclusive and luxurious Rolex anniversary watches of all time.

Rolex certainly knows how to celebrate a milestone anniversary in style and the brand’s various anniversary-edition watches are consistently favorites among many collectors. We look forward to seeing what else the Swiss watchmaking giant will come up with to mark the future anniversaries of its top models!