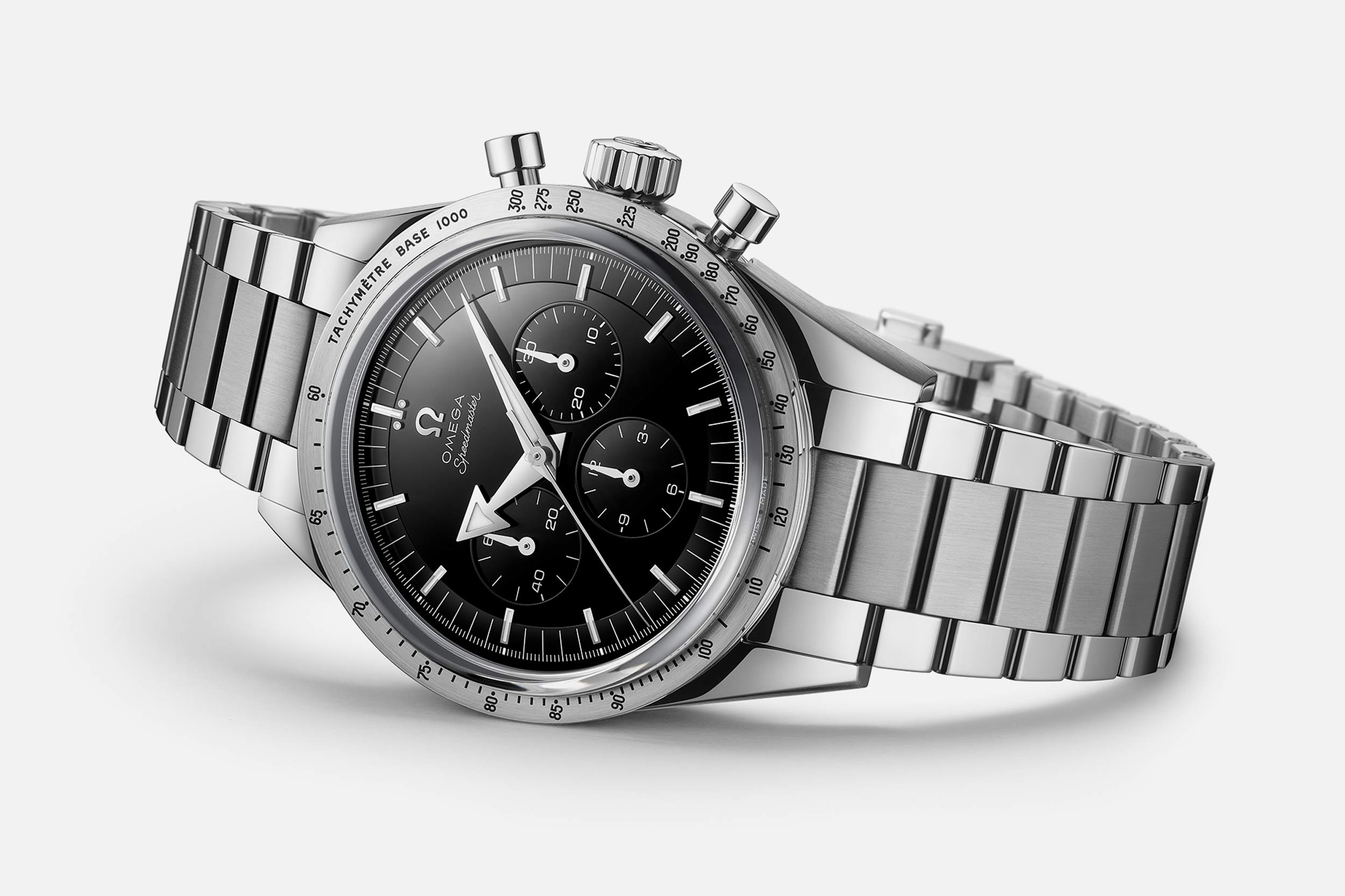 In what has now become a January tradition, Omega has unveiled a new Speedmaster on the occasion of the first Speedy Tuesday of the year. Last year, of course, we got an all new Moonwatch with an upgraded movement featuring a co-axial escapement and METAS certification, a watch that proved to be one of the biggest hits of the year. This year’s Speedy is impressive, but in a completely different kind of way. While last year’s Speedmaster was for the masses, this one is, well, very much the opposite. Made from solid white gold and running on Omega’s Calibre 321, this new reference pays tribute to the very first Speedmaster in the most opulent way imaginable. The new Speedmaster Calibre 321 is inspired by the original CK2915-1 Speedmaster, released in 1957. The important hallmarks of that watch are very much present in this new version in Canopus gold (that’s Omega’s own white gold alloy). The new watch features straight lugs, a broad arrow hour hand, and a case that measures a svelte 38.6mm. The bracelet is in the vintage “flat link” style that has once again emerged as the favorite of Speedy enthusiasts (or maybe it always has been), and of course the bezel has the appropriate “dot over 90” layout.

But this is more than just a white gold reissue of the original Speedmaster. That would be rather boring. Omega, after all, has already reissued that original Speedmater, and Speedmasters very much like it, in a number of ways over the years. It goes without saying that nobody has ever accused Omega of being shy when it comes to dredging up the past, and some of their releases inspired by historic models (or just history) are more effective than others at getting collectors excited. For this release, Omega has imbued nearly every detail of the watch with something unique and special, creating what might be the most maximalist Speedmaster of them all, with the possible exception of the platinum Speedy released in the summer of 2019, the first watch of this new batch with Calibre 321 movements inside. Let’s start with the dial. It’s a spot on recreation of the stepped dial found in vintage Speedmasters, but Omega has used multiple layers of onyx in its construction. The use of onyx is not unheard of in a Speedmaster (the platinum Calibre 321 Speedmaster has an onyx dial accented with meteorite subdials), but it’s certainly rare, and adds an unmistakable luxe touch to a watch that many associate with more sporting activities (like landing on the moon). Onyx has a high gloss and depth that should complement the white gold case and bracelet nicely. The rest of the dial accents are similarly high end. The hands are solid white gold, and the hour markers have been given a white gold PVD coating. The tachymeter bezel is engraved and filled with black enamel, which is a subtle flex of the craft involved in making this watch. The applied Omega logo at 12:00 is in a period appropriate style, as are the typefaces used throughout the dial.

Flipping the watch over reveals the Calibre 321, Omega’s historic hand wound chronograph movement. Now, I’ve been known to poke fun at Omega for endless limited and special editions, but kidding aside, the reintroduction of the 321 seems to be genuinely low production and hard to come by. The first stainless steel Speedmaster with the “new” 321 movement is simply not available anywhere, as Omega has them trickling out of their workshop seemingly one by one, fulfilling waitlist orders at a pace that must be maddening for anyone who made a deposit when they were first made available. Part of the slowness of the rollout is surely a result of the Covid-19 pandemic, but Omega has also made a point of highlighting that these movements are made the old fashioned way, largely by hand by a single master watchmaker, and completely separate from the production of Omega’s other movements. The price of the new Omega Speedmaster Calibre 321 in Canopus Gold (reference number 311.50.39.30.01.001) is $81,000. What is there to say, really, about a white gold Speedmaster approaching six figures? Production is sure to be incredibly limited, and there are wealthy people who are Speedmaster obsessed that will line up to buy one of these, but it’s impossible not to think about alternatives at and around that price point. A. Lange & Sohne’s 1815 Chronograph in white gold, for example, is a full $20,000 less, and a Datograph (in pink gold) comes in at almost exactly the same price as this Speedmaster. Both of the Langes have movements that are obsessively hand finished, although they’re obviously very different in terms of their aesthetic. It does seem, however, that Omega is positioning this watch against exactly that type of high end chronograph, similarly to how the Ed White 321 introduced two years ago was seen by many as going right at the Rolex Daytona. What it comes down to is that this is just a very different type of Speedmaster than the one that inspired good natured debate over its tool watch bona fides a few months ago. The Speedmaster as a full fledged luxury product isn’t exactly a new idea (this is far from the first Speedmaster in a precious metal, after all), but introducing this watch now, in a watch market that dealers and auction houses routinely refer to as “frothy” (one of the great descriptive words to describe market activity, in my humble opinion) is a play that seems entirely of the moment, when watches on the secondhand market are selling for unheard of amounts, and many are seriously wondering if the bubble is about to burst. Time will tell if that will happen in 2022, or if prices will continue to climb, but it’s clear that at the start of the year, Omega thinks the world is ready for a nearly $100,000 Speedy. Omega