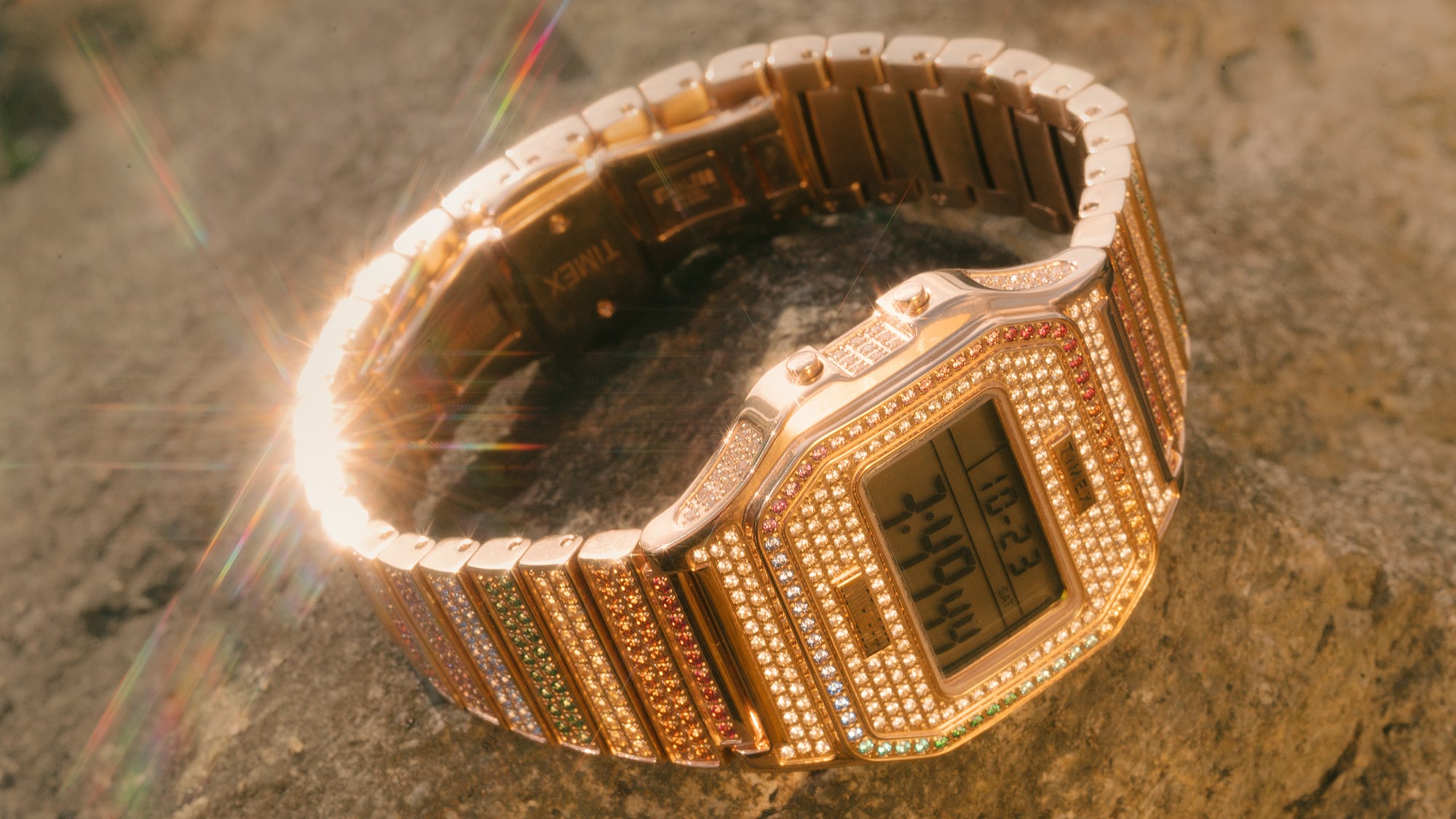 Known for its crystal-studded, animal-shaped, ladies-who-lunch-style handbags, the Judith Leiber brand is no stranger to collaborations. Nor is Timex, for that matter. But they still make interesting bedfellows.

Timex has always had a whiff of practicality, purpose, and accessibility, while Leiber has a distinct Dallas vibe to it – both the city and the TV show. Its products arrive noisily, like a champagne flute thrown across the room.

The Timex x Leiber collaboration has resulted in two watches, the 38mm stainless steel Q Timex and the 35mm rose gold-tone stainless-steel T80, which is the one I put on my wrist.

Wearing this watch was an exercise in self-discovery. When I was asked to go hands-on, I thought that I would have to approach it with the cool remove of a critic, putting Jack’s helpful theory of “what kind of watch does this want to be, and how well does it succeed at that goal?” into practice. I’m not really a rainbow-crystal-coated kinda gal (I ride hard for the Movado Museum watch, after all), and yet, and still, I found myself enjoying this tinsel-y Timex.

Here’s the thing about this brightly colored confection of a watch: It’s heavy. If there’s one primary surprise about this very surprising watch, it is that the way it stands in direct contradiction to how it looks. It’s a bit of a bruiser. The 35mm size is actually pretty perfect, though – any more and it would be cartoonish.

Along with its surprising heft, it looks much more subtle (mind you, it doesn’t look subtle subtle, just more subtle than a crystal-coated watch should be) on the wrist. The rose-gold tint actually blends in pretty well with my skin tone, leaving the crystals and the display to their own devices.

The crystals are inlaid into the band and the display, so they don’t overwhelm the watch. They don’t constantly catch the light like a disco ball, and in fact, if the watch weren’t so damn heavy I could almost forget that they’re there. All in all, it is more dull than expected, but in a good way.

It’s also a study in contrasts. It has a 50m depth-rating, but also 900 Swarovski crystals, not exactly dive-friendly. It’s blinged-out but still has the classic Indiglo light you’d associate with plastic cheapies. It’s expensive for a Timex, but totally normal for Judith Leiber.

It comes with standard digital features: Month, day, alarm. And it’s easy as pie to set up.

Judith Leiber creative director Dee Hilfiger (Leiber herself passed away in 2018) used a promotional video to make an obvious but important point: The watches, she said, are “conversation pieces … that make people happy.” And you know what, she’s right. My friends who saw me with it on said, “why do you have that?” and “that watch is not you, it’s me – can I have it?” Of all the watches I’ve worn around my pals, who skew more fashion-focused than horologically minded, this is the one that caught their attention.

Maybe if you are the kind of person for whom this type of watch would be expected (and aside from my friend Becca, the one who asked for it, I don’t know who that might be), you will not garner as much quizzical excitement as I did. But it will still be a fun watch to wear. It even passes the Jack test: Lo and behold, the watch accomplishes what it set out to do.

The HODINKEE shop is an authorized retailer of Timex watches. Explore the collection here.