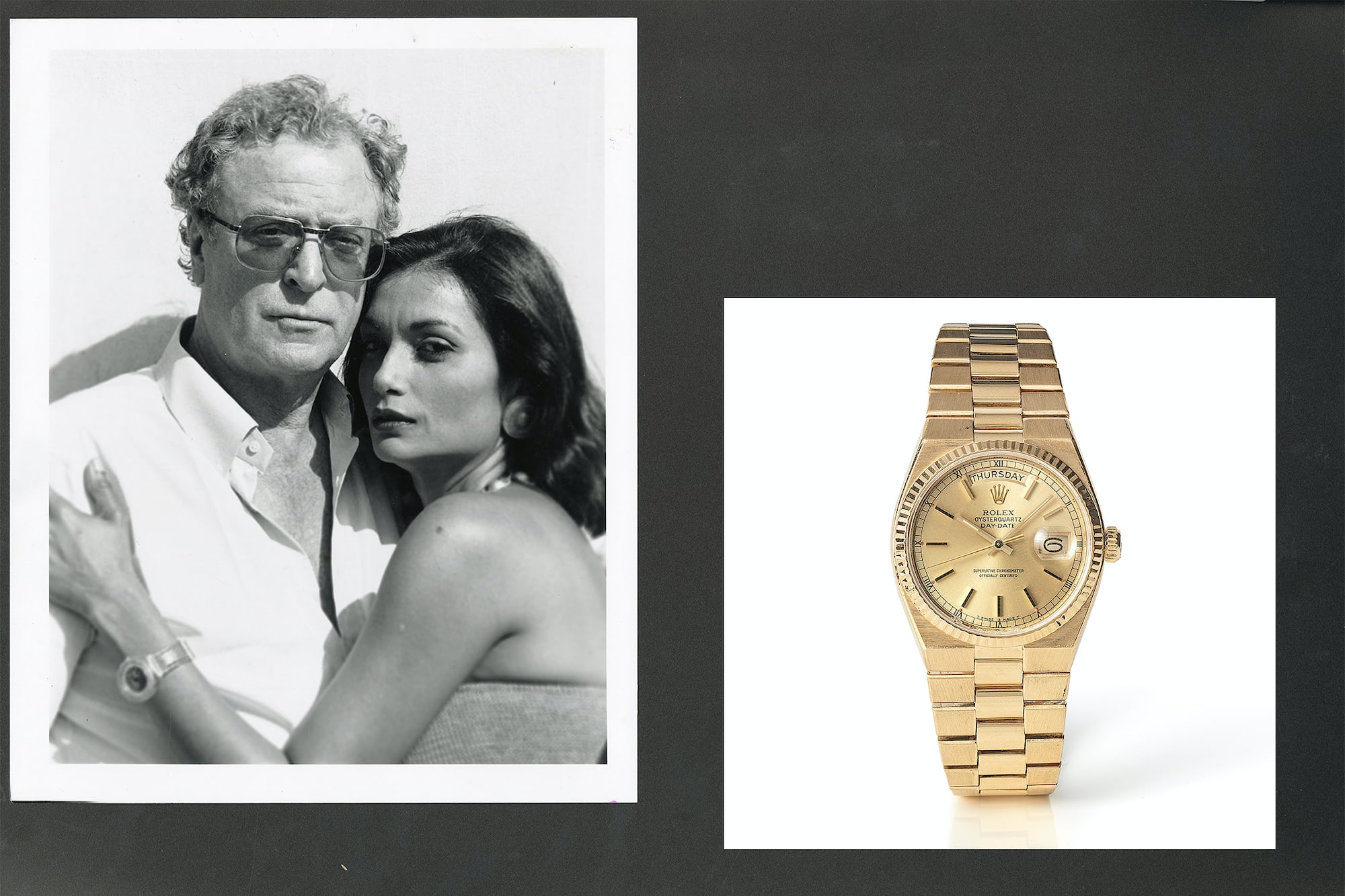 The London auctioneer Bonhams has just announced an upcoming sale made up of some personal effects of the Academy Award-winning actor Michael Caine. Hidden among the lots is a single, sold-gold Rolex Oysterquartz Day-Date ref. 19018 that the actor has been spotted wearing, off-and-on, since the mid-1980s. It even had an extended guest appearance on the actor’s wrist in the 1988 comedy Dirty Rotten Scoundrels.

The Oysterquartz is one of two watches the actor is most frequently associated with, the other being his similar-looking yellow-gold Rolex Oyster Perpetual Day-Date President that can be seen in 1971’s Get Carter on a leather strap, and in 1972’s Sleuth on its matching President bracelet.

Caine’s Oysterquartz looks to be in overall great shape. At the time this story was published, there were no exact condition notes listed on the Bonhams site, but you can tell that the case and bracelet have remained clean over many years of wear. You’ll notice a few chips on the crystal at six o’clock, as well as a couple discernible blemishes around the fluted bezel, but otherwise, it looks to be an excellent example of an off-the-beaten path Rolex.

First released in 1977, the Oysterquartz was Rolex’s response to the Quartz Revolution – a solid-gold, battery-powered contender in the dominant category of watchmaking of the era. Not just remarkable for the quartz movement inside, the Oysterquartz also has an unexpected profile, with a tonneau case, a champagne dial, and a quasi-integrated bracelet that is unlike any Rolex watch before or since.

The auction is taking place, Bonhams says, because Caine – who turns 89 this year – and his wife are interested in downsizing and “taking life at a more leisurely pace.” A few other notable lots in the sale include a painting by Marc Chagall, a pair of his easily recognizable hexagonal eyeglasses, and a portrait of Sir Michael Caine by Lincoln Townley, with the proceeds from the latter all going to Britain’s National Society for the Prevention of Cruelty to Children.

Scheduled for March 2, 2022, the “Sir Michael Caine: The Personal Collection” sale will take place at the Bonhams location on New Bond Street in London. If you’re interested, his Rolex Oysterquartz carries an estimate in the range of £8,000-12,000.

You can learn more about “Sir Michael Caine: The Personal Collection” at Bonhams online.